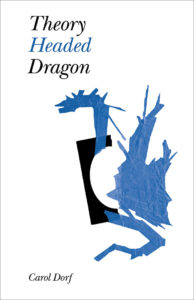 Theory Headed Dragon is the first chapbook from Carol Dorf. Dorf is a high school math instructor and the poetry editor at Talking Writing, and though these two professions seem somewhat contradictory, in reading Theory Headed Dragon, they began to seem perfectly natural together. In fact, the poet brings many different aspects of life into conversation with each other to tease out truths about humanity today.

A major theme of this collection of poems is time: the passage of time, and the idea of impermanence. In “The Early Morning Train,” Dorf comments on generations, not just of people, but of movements and ideas:

Almost all of those Nazis are dead

though there’s always something else,
like Skinheads and new Nationalists.
I thought the Cossaks were gone too,
but they are back attacking Pussy Riot

on live TV. I understood my parents as paranoid,
and my daughter thinks the same of me. (11)

It seems natural that one should pass and give way to another; we see here the cyclical nature of human life. This appears also in “The Persistence of Objects”:

clocks with keys, clocks with pendulums
all to count the analog world.
How did my grandparents’ clock
with flipping numbers arrive
in this category: Clocks, antique? (10)

Time marches on, and we replace those who came before us, and we will, in our own turn, be replaced.

Dorf takes care to show the reader how humans struggle against the march of time. The poet cautions, however, that this struggle to resist change and passing time can lead to dangerous denialism. In “On The Way Out Of The Memory Palace,” the poet examines the fascination with remembering and forgetting in popular culture. “The daughter’s memory
is a cove, where unexpected fragments” bump into each other; in response, her mother flippantly remarks “[they]have pills for that nowadays.” (13) In “The Thing Itself,” the denialism is regarding climate change: “This happens every year – perceived / climate fluctuations are not the same thing / as evidence of long-term change.” In response, the narrator darkly muses:

On the plus side, one could say
our weather grows more exciting –
less storm chasing, and more experience
of disaster arriving on the doorstep
suitcase in hand, asking to bunk on the sofa
for a week, a month, the long term. (7)

This connects to the second major theme of the collection: social issues. “Why Are You Always Writing Elegies?” addresses the reader: “At first light you want to recall / the dawn chorus of your childhood,” going on to highlight the modern landscape, one in which people and their attendant noise are now the soundtrack to morning life. The new dawn chorus is “organic mamas” in their gardens, and despite the continued presence of hummingbirds, the reader is understood to be complicit in their future scarcity:

consumed by feral cats, and the little bit
of Roundup someone can’t resist
when it’s time to sell a house –
so what is your share of the blame? (1)

A simpler time has been lost to the greed and consumption of humans, a gradual process which is nevertheless threatening the existence of animals, and even humans, as “The Truth Is Mending” points out:

you marched against this war
and signed petitions; but lacked the strength
to rip the seams out of the demagogues’
uniforms. Instead,
you say the bruised Monday
has nothing at all to do with your landscape. (12)

“Fungible,” meanwhile, highlights the divide between the impoverished producers in underdeveloped nations and the consumers who purchase the results of their labor in supermarkets “where private security / patrols comfortable illusions.” (6) The disconnect between humans and other humans, and that between humans and nature result in exploitation and destruction, conditions that the poet laments, inviting the reader to contemplate “All That Remains”:

We listen for chords
of the missing frogs
that scudded along
this river. (26)

The Theory Headed Dragon is a cerebral collection, filled with references to math and physics, psychology and biology. Dorf combines the scientific disciplines with the humanities, through the creative force of poetry. From this strange wedding come deep and important reflections on humans and our relationship to nature. What could have been a jumble becomes, through careful and considered choices, a voice of conscience for the world we live in.

Tessara Dudley is a poet-publisher-educator-activist making art at the intersections, in hopes of building a better world. Her work has been published by Wordgathering, Minerva Rising, and Words Dance Publishing. Tessara can be found at http://tessaradudley.com