She came in the guise of my dog to lure me away, as Apollo lured Achilles away from the walls of Troy. I saw her from the window running through the marsh and had a choice to make, to follow her, or stay and do what others expected me to do—listen attentively to the poet reading, stay near my children who were being watched by respectable God-fearing teenagers in the next room. I opted to go (not that I chose her over them, but to me her name spelled f-r-e-e-d-o-m), follow her over a plank bridge through the mud flats where red wings sang out in raspy trills and swayed precariously on cattails. She kept running, taking me farther away, over the sloping fields and into an old farmhouse where she disappeared up a staircase that ended at a window. Vanished. I was left alone on the stairway and then was not alone; people brought in cold sesame noodles and Jell-o molds, set them on a long white-clothed table below, and went in and out of rooms. I perused the table and my dog appeared again; I stole out the back door and followed her, again, but the guilt started to set in. The poet would be disappointed (she had even started texting me the verses of her poems). And of course there were the children. The children! I lost the dog.
Gurus and hippies wearing white sheets and grape leaves in their hair flooded the streets. In one building they were eating vegan meals upon tables and chairs they carved with their own hands. Colorful Tibetan flags hung from the rafters. I tasted the food, sour like cigar leaves, and spit it out. I called out the names of my children over the din of the crowd. I went frantic out into the street where a white wave came rushing toward me, and I feared being trampled. But they lifted me up into the air. I crowd-surfed then grabbed a-hold of the sacred flags against a building to hoist myself up. Someone reprimanded me. I said, “Fuck off, this situation is dire.” I hoisted myself off the wave of the crowd. I knew I had it in me to rise up, so I ascended over the brambles, over a guru who followed my projectile from below. When I landed, he gave me a smoking gourd, said if I spent time with it in my hands it would teach me how to use it. I ran through the dispersing crowd with the smoking gourd in my hands, calling the names of my children. 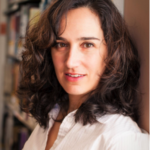 Laurette Folk’s fiction, essays, and poems have been published in upstreet, Literary Mama, Boston Globe Magazine, Talking Writing, Narrative Northeast, So to Speak among others.  Her novel, A Portal to Vibrancy, was published by Big Table; Totem Beasts, her collection of poetry and flash fiction, is forthcoming from Big Table in 2017M. Ms. Folk is a graduate of the Vermont College MFA in Writing program and editor of The Compassion Anthology. http://www.laurettefolk.com/