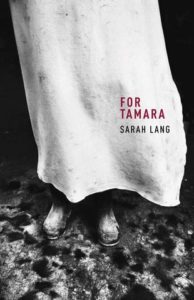 When the unthinkable happens, what do we tell our children? When they are born to us, we have ideas about what kind of people we wish them to grow into, but after the nuclear apocalypse, how do we revise our plans? This is the emotional core of Sarah Lang’s For Tamara, a book-length poem narrated by an unnamed woman who, it transpires, is both incredibly strong and incredibly vulnerable. Having watched on television the annihilation of major U.S. cities—until there were no longer any broadcasts nor any electricity to watch with—she finds herself desperately trying to feed and shelter not only herself and her small daughter, but also a handful of survivors who appear to be dependent upon her. Her story unfolds as she speaks to (sometimes writes to, sometimes draws to) the daughter she has decided to call Tamara, and to her missing husband, and to the survivors for whom she has become a leader. To her daughter, she writes on paper she scavenges or makes herself,

Tamara, I never wanted kids and then all this happened and you were
here. / Thank-you. / Remember what I look like.

Mum doesn’t want to have to teach you to fight, but she will./ And
you will teach others.

I realize I haven’t taught you much history. / Part is that I don’t want
to remember what it was like even a few years ago. / Part is where to
start./ And no idea if that will change a thing. (16)

In her past life, the narrator was a lover of languages, speaking many of them to her husband. She wore stiletto heels. She loved and was loved. Now, in this new life, she suddenly finds herself drawing on knowledge she never realized she’d need: howto make paper; how to treat infection in the absence of medicine she once took for granted; how to build barriers to protect the perimeter from others who might wish to harm their band of survivors, whom she occasionally addresses directly:

Raise hands. / Military or ex-military experience? / I don’t care
how long ago. / Wilderness survival course? / Camping? / Girl/boy-
scouts? / DRS’/ Field Medics/Medics/EMTS/Lifeguards? / Any and all
advanced medical? / Who here can garden? / Knows pharmaceuticals
and/or chemistry?/ Water sanitation? / Basic engineering? / Nuclear
physics? / We are breaking up into teams based on skill sets. / Why
am I the leader, b/c I am leading and it is working. / Next? / I am
delegating and deferring to all team leaders. / Leave if you want. /
Best of luck. Then again, if there are more details added re: other
characters, it could seem like a very natural offshoot. (33)

Everything she had thought would be passed on to her child she has discarded as a nicety; now she teaches Tamara about survival. At one point, desperate for antibiotics, she is party to holding up a pharmacist, telling him he is welcome to join them, but they need his medicines and will be taking them from him, whether he is willing or no. In her pre-apocalyptic life, this would have been an unimaginable harshness.

Yet in one of the strands of her story, the speaker addresses her missing husband. He apparently worked at some kind of government job in a bunker somewhere—she doesn’t know what, she doesn’t know where—and when the bombs fell, did not return home. The narrator shies away from the possibility that he might be dead; instead she clings to a hope that he’s out there somewhere, trying to get back to them, trying to contact them. As the time in the poem accordions (it appears, from beginning to end, as though years have passed), her hope turns to anger: she curses him for his absence, but still addresses him as though she knows him to be still alive:

You Idiot./ You can’t figure out a way to contact us? / With every-
thing you have access to? / I wish I could promise T. you were trying.
/ I wish I knew what was stopping you. / And yes, I–we–have
to believe that. / I think we’ve isolated the problems w/the water.
/ And yes, I believe you are still alive, under all that whatever / in
that bunker / that work you never told me about. / Or you’re out of
supplies. / No. / T., when you are older, you will understand these
letters. / I love you / but I need your Father / we all do. / I promise
Tamara, anyway you know. / Just so you know. / With everything
you have access to / you wouldn’t just not find us. (43)

For Tamara is a heartbreaking work, one that is challenging in terms of content. At the same time, the construction of this long poem challenges the readers’ understanding of what a poem can be. Language is fractured. Address is fractured. Line-breaks, stanzas, all the niceties of conventional poetry—Lang has written the story of the struggle of rising like a phoenix from the ashes of post-nuclear devastation in a way that echoes and illustrates the tearing down and rebuilding of the rules of life as Tamara’s mother knows it.