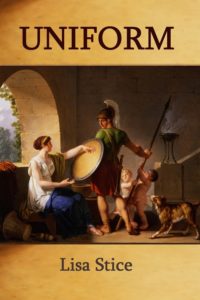 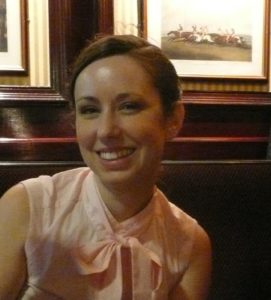 The Marine Corps ought not to permit marriage. A monastic order all the way. Married men make poor soldiers. If the government wanted you to have a wife, they’d issue you one.
–Lt. Gen Lewis B. “Chesty” Puller

This opening quote sets the tone for Lisa Stice’s first collection of poetry, Uniform, in which Stice contends that marriage to a Marine includes a third entity, the US Marine Corps. In fragmented language that could be right out of a treatise on warfare, we follow a young wife of a Marine Corps officer as she, much like the new kid at school, tries to understand and integrate herself into a culture she did not choose to live in.

The poems revolve around the struggles of a military wife and the confusion, lack of information, and isolation that go along with having a spouse who is active in the military. There is no loneliness like Stice’s speaker’s when she compares her marriage in “Unconventional Warfare” (19) to finding a Trojan Horse that looks harmless but whose belly is full of other officers’ wives. Illustrating her alienation, she shows us these wives “cordoned off” from her in the belly of the horse, while her husband only watches and “eats ribs and laugh(s)” seemingly unaware of her isolation. Later, in “Spartan Wives,” (42), we learn that these wives must, “assume every great burden / of home and hearth and land,” as if they are the soldiers of the home front.

Stice’s point is an obvious and ignored one. You don’t choose to marry the corps, only the officer. And while officers are often deployed, the corps is always present. The wife is left alone in a community of other wives who seem judgmental and insincere, but who must surely share our speaker’s burdens quietly. Her isolation and loneliness is distilled in the rules for wives, shown in “An Officer’s Wife,” where the title leads into the statements that follow. We learn that an officer’s wife

But also that there are rules to be learned for when the spouse comes home, when the wife
learns not to ask what did you do today

This poem also gets at one of the two main fears of this speaker, that her behavior will have negative effects on her husband’s career. The poem ends with a warning.

discretion failed will be dealt with
promptly, and with sufficient severity
to the attention of higher authority

The other fear, of course, is what happens to her husband on deployment. Home alone with an infant and small dog, she lives with the anxiety of not knowing where her husband is and if he is safe. In “In Training,” it is the wife who is being trained on how to survive when she hears of “7 killed an accident mechanical failure” and does not know if her husband is alive (26). The poem twice asks “Where are you?” and this refrain is interjected between accident reports, highlighting the danger her husband faces on a daily basis.

Stice often relies on Marine Corps rhetoric and even occasionally on actual documents, explained in three pages of “Notes” at the end of the book. In “Labor Days,” the italicized opening suggests the lack of support for a wife alone and in labor: “We wish we could accommodate you,/but we are understaffed,/and no beds are available.” In some poems, such as “Cemetery” (53). Stice uses fragmented language and lists of words to convey the abstruse nature of military speak even when mourning the loss of one of their own.

nothing
only praise
proper tribute

those who lament
loss
mourn

The third and final section gives a strained look into life when deployment comes to an end and the officer must integrate into the family waiting back home. The language loosens up and becomes less disjointed, but the pain and loneliness of this life are only compounded. Stice laments in one of the early poems, “Where is my training,” which, like most of the poems here, illuminates the frustrations unprepared military spouses must feel. Rather than end on sadness, though, Stice’s ultimate poem suggests that this is a temporary state, as the speaker warns herself not to eschew who she is entirely because “when this life is over / you’ll want that person again” (“Brides and Grooms” 80).

Christine E. Salvatore received her MFA from The University of New Orleans. She currently teaches literature and creative writing at Stockton University, in the MFA Program at Rosemont College, and at a public high school in South Jersey. She is a Geraldine R. Dodge Poet and a regular faculty member for Murphy Writing Seminars. Her poetry has recently appeared in Diode, The Longleaf Pine, The Fem, The Literary Review, The Cortland Review, Mead Journal, and elsewhere.