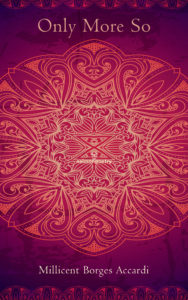 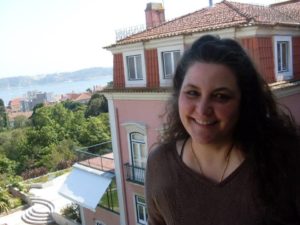 
To read Millicent Borges Accardi’s Only More So is to step into pools of lush, full waters only to be pulled under by currents almost unbearably swift. This is a “jump into frozen water” (75), which invariably requires a “ … cardinal leap of faith” (75). Accardi’s poetry has earned fellowships from the NEA, Fulbright, and the California Arts Council, among others. Only More So is first and foremost astoundingly brave poetry because it explores subjects such as oppression, violence, rape, ethnic cleansing, and breast cancer. Women, in particular and unequally, have had to bear these tragic events, often alone and without a voice. The leap of faith comes through Accardi’s articulation of these events with grace and clarity.

If life’s true work is survival, then Accardi provides us with a road map of words, dropped and pulled taut like strong, luminescent threads. She guides us along with her string of graceful, colorful images: “a diamond-point blade” (12), “rebel tanks … shaking houses like wind, carving up the patterns of the land” ( 13), and “the purple descending/from the sky backwards/like beauty” (48).

Recurring motifs appear in Accardi’s writing such as water in its various and tumultuous manifestations, and religion. In Accardi’s poems, Catholicism is as much a part of her Portuguese culture as the political landscape. Indeed, it was under Salazar’s Concordat of 1940 that Catholicism was deemed the national religion. Catholicism was inextricably woven into the fabric of everyday life and there was no dissent allowed. Accardi’s poems become the words needed: “I am the mirror for all who choose/not to speak” (19).

As readers, we are pulled under, as if by brutal undertow, to places, times, and events that are eternal in our collective memory such as Croatia, Nazi Germany, Prague, and Portugal, 1970, under the steely grip of the public security police. Then, unexpectedly, we are washed up onto the shores of the United States. Yet, Accardi reminds us that even here in the land of democracy, these type of situations have not faded or become invisible; they keep happening. The parallel between what happened in Portugal in the 1970s under the fascist dictatorship of Salazar and what is happening today to young African-American men and women, is hauntingly familiar: “Walk home determined… Do not pause … Do not hesitate” (24).

Then, sacred water rushes in and Accardi’s poetry becomes an act of resistance. In “Mother Ditch,” Accardi wrests history from disappearing and invokes a chorus of life: “Mother ditch. / Zanja Madre / Precious water to the pueblo. / A life found. A life lost. / We are open, construct me. / We are hidden, take me apart” (61).

Accardi’s focus on women remains steadfast and magnanimous, and it is through their voices that even “storms retreat” (55). In the poem, “The Story of the Stories” these women chant “to make / An illusion. Like life. / Like Jesus himself / Arisen from the world”(55). We can’t help wondering with this line if the women represented believe that the Christ figure has left the world behind altogether. Women, after all, are the true keepers of stories. In “Faith,” the only color that praying nuns “ever wear flows onto cotton / rags between / their thighs” (75). However, in Accardi’s visionary poetry, the triumph is for women everywhere, through one harrowing event after another, to “still believe they are female” (75).

Barbara Ellen Sorensen is a poet and writer. She contributes to the Tribal College Journal and has two poetry publications: Song From the Deep Middle Brain(Main Street Rag, 2010) and Compositions of the Dead Playing Flutes (Able Muse Press, 201