When El-Natan was born
the room swelled like a balloon
and filled Jerusalem,
my wailing knocking on the walls,
my open legs the valleys of the souk
and he between them,
the rope of our dual history
unfurling him.

At night
his cradle was a lake
and I was God
and he a Noah’s ark
of wild things he’d become—
puppy, monkey, eagle, wolf, gazelle.
His nails were all the necklaces
I’d ever worn,

his skin a pale reflection
of God’s dreaming.

And in the creases of his ears
the Jordan river flowed
with messages of war.
The rustle of the radio said
Over, over.
His gums were bunkers—
in them lay, instead of teeth,
the bodies of the boys
who born and gone,
were calling from his mouth. 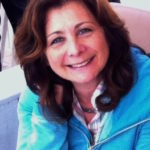 After receiving an honors diploma from the London School of Journalism in 1994, Katie Green went on to write non-fiction for numerous publications and internet sites. In 2003 she graduated from the Ma’aleh film school of Jerusalem as a scriptwriter, director and editor, and both her graduate films “Prague” and “16” were shown on Israel’s Channel 2 television. In 2013 she graduated with honors from the Masters degree Shaindy Rudoff Program in Creative Writing at Bar Ilan university. Today she is festivals coordinator at the Maaleh film school and is also an independent editor and translator, with a specialty in subtitling films. She has published her stories and poetry in Jewishfiction.net, Cyclamens and Swords, Yew Journal, and Pangyrus. In 2015 her story “The Color of Sand” was short-listed for the Moment Short Story Fiction prize.