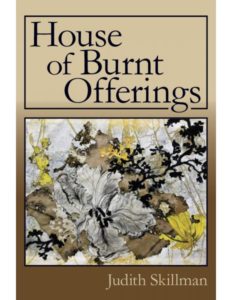 In many ancient myths, the wound simultaneously provides cause for suffering and source for transformation. The poems in Judith Skillman’s latest collection, House of Burnt Offerings, reflect this view. While a number allude to mythological or literary figures, most live in the present rituals of daily life. They center on childhood memories, marital struggles, encounters with illness and aging, and the disappointments that result from unfulfilled desires. Many focus on the various wounds, both psychic and physical, that transform life and provide insight. Skillman’s language creates metaphor—another means of transformation—and these metaphors resonate most strongly throughout the book.

Perhaps the most obvious metaphors of wounding appear in the poems that explore illness. “Hashimoto’s Disease” addresses the speaker’s realization of a disorder that manifests subtly within her body. The poem opens with a metaphor that illustrates the weight of illness.

I dreamt a trunk
came down from the ceiling—
wrinkled and gray
as an elephant’s.

It entered small,
innocuous, as a plant
pokes a shoot through soil.
……………………………
The trunk became larger,
waving itself
like the flag of some symbol
I would have to decipher
when I came
from the state
of sleep to another long day…

As the speaker becomes aware of the invasive illness, she refers to it as an unwelcome guest.

Again the intruder—
majestic, horrific
as it overtook
the dining room—
proclaiming, gesticulating. (43)

This poem, which culminates in a diagnosis, explores the speaker as she crosses a threshold, identifies with the illness. This opens an opportunity for awareness and understanding of suffering.

The understanding is not limited to the physical. Much of the wounding that Skillman contemplates is psychic. And these wounds create spaces for introspection. A few poems meditate on the impact of childhood trauma. In “The Train,” the speaker reflects on making art in the face of difficult memories.

I crochet my childhood.
It falls like cream into my lap.
I make the same shawl over and over
but it never warms me
or keeps me from harm. (25)

Later, as she depicts the breaking of a marriage, she accounts an assaultive sound that strikes and threatens a state of union.

It’s the ping of icicles
made our marriage
come apart.
However simply it dissolved.
Notes of birds
cordoned in the yard,
and the cribbage board’s
long-abandoned ivory pegs
shining like the white eyes
of the kraken
when it fell off the house
at last and we could sleep again. (50)

As Skillman’s poems seek to understand rather than deny suffering, they rarely conclude in clear resolution; rather, they acknowledge that wounds live unhealed and questions exist unanswered. In “The Young Widow,” Skillman examines a woman’s guilt after her husband’s accident:

After his death she found herself
at the intersection again and again
with the same thought—if only I had been
there I could have stopped…, and she stopped
herself from thinking that. (81)

The poem concludes as the woman, years later, survives the loss, but also accepts, the futile absence of resolution.

Where he went remains an open question,
one she can no longer remember asking. (82)

Skillman makes frequent reference to the transformative effects of aging. Her poems suggest that wounds reshape the aging body. In “Swaybacked,” the speaker opens the poem with reference to her own wounded identity.

I enter the animal called self.
Its bones no longer quite aligned. (8)

The speaker continues to muse over the fleeting nature of youth, and in the last lines, expands to the larger experience of aging.

I enter the light called dusk.
All the symbols of youth swallow, swallowed by Eliot’s violets .
Tiresius—even Prufrock, who hardly knew whether to eat
the bloody peach.
I enter my spine as a question mark. (9)

One of the last poems in the collection, “In the Doghouse,” depicts a tension between acceptance and resistance. The poem illustrates the speaker as she identifies that in the face of change, the stars, like jeweled gifts, stay fixed. As she accepts the challenges of age, she identifies a familiar comfort in what remains the same.

Cold seeps in, sun clips horizon.
Repulsed by my own doggedness,
my desire to please, I settle in
for the longest night, where stars
glitter like treats and jewels. Gifts
so obdurate I know they’re mine
if only light years ago. (91)

Skillman’s poems traverse through changes that manifest from living a full life. Her metaphors suggest, not shrinking from scars that result from these changes, but instead learning to embrace and accept the wound as an illuminating source.