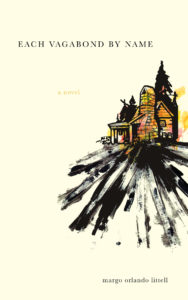 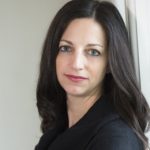 – In Margo Orlando Littell’s first novel, Each Vagabond by Name (winner of the University of New Orleans’ Publishing Lab prize), a Pennsylvanian town stands as a microcosm for our response to the millions of immigrants, refugees, and displaced people on the move across the world.

The mountains that border the town of Shelk provide unreliable protection from an influx of ‘gypsies’ whose casual thievery escalates in tandem with the town’s fear and rage. Shelk’s residents don’t know where the camp is, but they feel its presence as malevolent. The surrounding hillside harbors the gang like the weed-filled perimeter of a vegetable patch hides slugs intent on eating the harvest.

The book’s central character is Ramsy, a man resigned to his losses and lack of attachment, and still in some ways a stranger to the town he’s lived in for thirty years. His unsettling eye patch covers other losses. But as Hawk says when he installs Ramsy behind the bar, “No need to tell me your story. I don’t want to know it. Heard too many already. But…..I need an heir” (114). Ramsey is more than happy to oblige setting. Tending bar sets the tone for Ramsy’s role: a listening ear for the menfolk from behind a bar that will always keep him a little bit separate, and a lost eye that the men imagine give him “a secret life he did not have” (59). Ramsy stays behind his own metaphorical wall offering very little of himself until his personal involvement with one of the gypsies—a young man called JT—and the increasingly violent impulses of the men who come each night propel him into action.

I found Ramsy to be reassuring company. A calm reflective voice as the tension mounts, he is wise enough to acknowledge there is less difference between the ‘bad gypsies’ and the ‘good townsfolk.’ He understands that the damage we do to ourselves can match anything we fear others may impose. And what we fear being taken is nothing compared to what we might let go of through negligence.

The only female regular in the bar, ex lover Stella, seems to find Ramsy a safe haven, too, despite her excruciating envy at his estranged daughter having found him whilst hers has remained missing. Other townswomen, peaking too early as teenage beauties, plummet inevitably into early old age through disappointment, poverty, and resentment. Take Kitty (the wife of Jack, the primary instigator of the town’s violent impulses towards the travelers) who starts an affair with Emilian, the violent leader and ‘real criminal’ of the gypsy gang. Her craving for attention, excitement, something, anything, eventually frightens her as she realizes she has provoked an inevitable and fatal confrontation.

Hope feels raw, brittle, crude, and humiliating to those who dare to feel it: Stella, desperately searching for a lost baby along the trash strewn highway, and half believing that Adrienne, a teenage gypsy teen mother, could be her own long lost daughter; the travellers who occasionally let slip an aching longing for community despite “their only glimpses of home the stolen kind” (244). Ultimately, hope surfaces as we see tentative and albeit partial acceptance of Ramsy, Stella, and Adrienne and her daughter as a new kind of Shelk family. It is a deal of sorts: the townsfolk don’t admit, accept, or take responsibility for the bloody altercation on the mountain side, but they will take the redemption that opening their borders (in part) to this modern, constructed family gives them.

In modern politics, ‘undocumented migrants’ are all too often cast as outsiders with bad intentions, even as thieves and murderers whose integration risks the safety and sovereignty of the community. In Each Vagabond by Name, Littell examines the positive of integration. She contrasts our human desperation for the return of what we have lost with the opportunities we might gain if we were to entertain the new ideas that today’s migration brings.

Rosalind Howell is a UK based Dance Movement Psychotherapist. Her writing has appeared in blogs and journals in the US and UK. Most recently she Co-Lead Edited the inaugural edition of the Journal of Mother Studies. She lives in rural south east England with her husband and three children