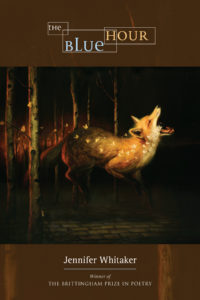 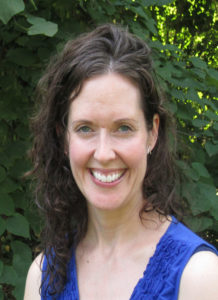 – The fairy tale has long served a dual purpose for the human imagination: one of warning, one of protection. The telling or reading of such stories alert us to the world’s continual balancing of will and behavior, manifested in the classic pairings of good vs. evil, light vs. shadow, right vs. wrong. These stories also save us, even spoil us, by exposing the successes and consequences of such stark dichotomies: they are words, images, plots, and characters through which we learn without burning ourselves. But what happens when this apotropaic magic is considered in reverse, when real life’s “blue hour” is infinitely more horrifying than all that metaphor or simile can muster?

. . . I quit the whine that sent me here,
I crouch in the bright six o’clock dark,
like a cave cricket, in its fear
and ricochet frenzy blind
and springing toward that which frightens,
that which could easily be you— (30)

The you of this Brittingham Prize-winning collection out of the University of Wisconsin Press is a sexually abusive father, the real consequence at the end of every fairy-tale lens Whitaker employs: “He my hood of improbable red, / my crumb-scattered path, / my wolf finally thrown in the stove” (4). Just a brief scan down the collection’s table of contents at its poems’ titles shows that the tales referenced are numerous—“Rumpelstiltskin”; “Story in Which the Daughter Waits for the Hunter to Return”; “Snow White as Apology from My Youth”—many of them taken from Giambattista Basile’s seventeen-century collection the Pentamerone, brutal predecessor to Perrault and the Brothers Grimm’s adaptations. Whitaker is deft when it comes to rendering the familiar fairy-tale image newly unforgettable: wolf’s eyes “dipping in the dark like lanterns” (26); the step-sisters “fussing the dishwater curls at their necks” (36); and Snow White’s “red lips reveal[ing]a mouth of [the Queen’s]blood” (33).

Powerful, too, is Whitaker’s ability to take a stock image from the genre, the dress or gown, and lace it with heartbreaking complexity. The garment is home to both salvation—as in “The Invitation,” where, once lifted, the dress becomes “an upside-down parachute / with bow and buttons up the back” and “a prayer” (15)—and doom, as seen in “The Gown”:

. . . the gown was a bouquet of grown-up women,
the smell of Mother sleeping in another room.
It crumpled and stained and later smelled strong of sweat,
was never washed—just boxed back up
to be put back on, bodice hanging concave at my chest. (24-25)

“The Gown” also brings up an essential undercurrent: in a collection that predominantly details and addresses the father and the repercussions of his behavior and will, how does the speaker understand the mother and motherhood? Is she complicit, like Snow White’s Evil Queen? Absent, as was for Cinderella? Deprived or threatened herself as in the stories of Rapunzel or Rumpelstiltskin? In the handful of poems that reference or address the mother’s presence (or lack thereof), including “Mother as Blossoming Vine,” “Mother’s Foxes,” and “Fairgrounds,” Whitaker does not answer these questions neatly. Instead, Whitaker wrenches the issue further, exploring how her daughter-speaker absorbs from this vacuum, from this everyday nightmare, the role of motherhood for herself. It is the daughter who “put[s]on [her]clean dress” after the father violates her (14). It is the daughter who chases the father to come back as he leaves the house, saying, “I’d twinned us with this choice” (35). It is the daughter who compiles the courage to respond by multiple letters to the father, while the mother cannot understand “how / [the daughter]could have ever wanted to hold his hand” (51). And, in the collection’s last poem, it is the daughter who surfaces: “an evening storm— / quick, and out of so much dead calm” (56).

The Blue Hour is not an easy book to read nor respond to, but it is one I keep coming back to. The language of its trauma is precise, dazzling, and its heroine is stronger than any story in which Whitaker locates her. Her existence is our warning, and her survival is our protection.