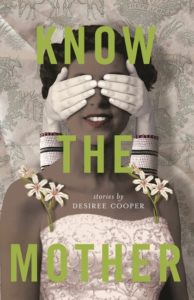 – There is no better time for flash fiction than the summer. In between corralling children to sporting events, the beach, and various summer destinations, flash or micro fiction gives a respite, like a lick of ice cream. It is easier to deal with repetitive, “Mama, look at me!” requests when one is still pondering the after-glow of a good story, and each piece’s short duration (1-9 pages each) allows Know the Mother to slide easily into a busy schedule.

Desiree Cooper, a 2015 Kresge Artist Fellow, Pulitzer Prize-nominated journalist, and community activist, casts a spell with each of her thirty vignettes. She is a virtuoso of tension, allowing each piece to rise in crescendo towards the final piercing lines, leaving the reader to find resolution in the white space. Each story is a glimpse into violence: the large and small aggressions lived by various women at different stages of life. The characters are mothers, children, wives, caretakers, the elderly and the infirm. In Know the Mother, women are haunted by debilitating fears, racism, illness, and fertility—each speaks to the universal experience of powerlessness. Social standing does not insulate these women from the pain of racism or misogyny, the indifference of a husband, or the biting fear of real or imagined predators. Cooper has given voice to invisible women, made their anguish vibrate on the page. Yet, the book is not depressing, due to the beauty of the writing as well as the universality of her themes. These are women we know; these are women we have been.

Cooper’s skill lies in the balance between what is revealed and what is left unresolved. I have a somewhat adolescent desire for everything to be tied up neatly in stories, but her unsettling conclusions never left me irritated or feeling short-changed—each vignette was a complete moment, a snapshot of feeling so intense it is nearly tangible, and as each story concluded, the characters remained a haunting presence, floating just beyond the other side of the page. I knew these women—I recognized my friends and relatives and myself on the page. I felt their truths, even if I was never given more than a few pages about their lives.

The longest story at nine pages, “Night Coming,” starts in fear. Nikki, a professional African-American woman, has moved from her home state and family with her husband to Detroit. Nikki is ungrounded in a city where violence lurks even in their upscale neighborhood. We first get a hint, though, that there is more to this story than displacement in the line, “But deep down, Nikki worried that escape would be harder when weighed down by useless things” (48). The tension builds when the husband arrives home, and more layers are added paragraph by paragraph until we get to the twist at the end. As in all of her stories, Cooper manages to braid several themes together into one short piece, resulting in well-fleshed out, complicated women who always end up somewhere unexpected.

“The Disappearing Girl” is a pleasure to read, crisp and to the point, with no unnecessary words. The story is only two-and-a-half pages, yet by the end I had tears actually running down my cheeks, something that doesn’t happen all that often in my world. The brevity of the piece means I can’t say more without spoiling the plot.

Cooper takes various points of view: first person, third, and second, but most of the stories are told in third person, giving the reader a bird’s eye perspective, allowing us to see what is going on in the room next door, or to flow in time forward and backward.

“The fun is melting in the heat of the aluminum boat” (10).
“His voice was like the sky whispering her name. Like wind lifting a kite” (70).
“…hovering over her son like a thought balloon” (13).
“My daughter is easy to recognize, officer. She’s the one with her heart beating in my pocket” (56).
“She is standing apart, her eyes scanning the rows of cars, a refugee on a hostile shore
waiting for an airlift” (89).

Mother/daughter/abuse/race/fear/aging/touch/invisibility; her themes cut to the bone of womankind. Know the Mother will haunt you as you applaud that fact that Cooper’s women have been given a voice, a dignity previously unseen.