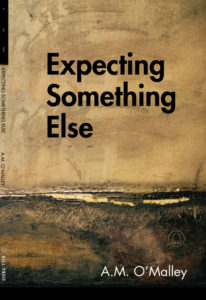 – Whether read as a memoir in verse or a collection of poetry, A. M. O’Malley’s Expecting Something Else is a hybrid text that resists categorization. The collection of short prose poems reads as a nonlinear succession of short scenes that comprises one young woman’s coming of age. But as the title suggests, this may not be the coming-of-age story you expect.

Born to a mother who encounters a long struggle with substance abuse, problematic men, and abject poverty, the narrator has lived a youth littered with neglect and abuse. Ultimately, the young speaker accompanies her mother through many tumultuous journeys and often communicates from this perspective of witness. She reflects,

I was a baby I grew up in the back seat
of a car Most girls remember their
childhood bedrooms like I remember
tears in upholstery smells changing
from rusty to mossy in April Distorted
radio August then November Thin air
deep snow . . . (58)

O’Malley portrays a mother-daughter relationship steeped in chaos and conflict, but also, at times, in tenderness. Even in the severity of their circumstances, the mother and daughter explore a familiar ambivalence that exists in many mother-daughter relationships. As O’Malley explores this complexity, she experiments with line, syntax, sentence, and diction. She opens each section in the book with an erasure from Nancy Friday’s My Mother / My Self. Yet O’Malley composes these sections, piece-to-piece, sentence-to-sentence, with no punctuation. As a result, sentences read with a fluidity that invites ambiguity of meaning and syntax. Without the boundaries of punctuation marks, sentences work to blur boundaries between mother and daughter, anxiety and comfort, expectation and hopelessness. The stream-of-consciousness rhythms of the text resist confinement or closure and further emphasize the speaker’s ambivalence.

O’Malley also creates emphasis in her repetition of diction. Throughout the book, the speaker repeats the sentence, “I kept eloping.” In this case, the word “eloping” refers to “running away with no destination in mind” (8). As she comes of age, the speaker attempts to escape the poverty and chaos in her mother’s life only to create her own. She recalls, “my mother says she / is a wandering soul . . .” (71), but she also recalls her own unruly running.

In spite of the repeated reference to “eloping,” these poems are simultaneously returning, to the mother, to the turmoil of home. The speaker’s early attempts to escape only bring her back, full circle, to the place from which she wishes to flee. Still, in that irony, the speaker can recognize, forgive and ultimately claim her identity. At times, O’Malley’s speaker addresses her mother directly and acknowledges her; she may simultaneously accept and reject her mother, yet instead of escaping, she is embracing her complex emotions.

. . . You disappear and reappear
sometimes in the mirror sometimes
in my feet always in my hands with
their leftedness and their veins I am
now resisting this an epitaph I
am resisting resolution Let’s leave it
unclear (54)

Expecting Something Else is not an inquiry as to whether one can go home again; this book explores the question: Can we ever leave? Even after a daughter physically departs from her mother, a connection remains. This connection between mother and daughter exists deep in the body, in the psyche. As the speaker diverges from the mother, she also accepts those inherent aspects of mother within the self. O’Malley’s story moves, not in one simple line, but in many concentric circles, all of which lead to that to mysterious place of origin we may call home.