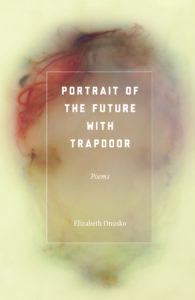 – His office is covered floor to ceiling / in photos of infants’ faces / stuck to the walls with long needles. / I lie upon a bed lined with butcher paper. (29)

Experiencing life vicariously through poems—on falconry, on surviving an earthquake, on growing up blind…on whatever—fascinates me. Those poems open up worlds I am unlikely to visit. But there is something magical about poetry that hands over a known world. Such poetry opens a conversation that is full of questions: how will this poet narrate my world’s landmarks, its streets, its currency? might I remember this world differently in the wake of reading? I was delighted to discover solid and challenging answers in PORTRAIT OF THE FUTURE WITH TRAPDOOR, a collection that opens a dialogue on endometriosis, infertility, and pregnancy.

Most women I know feel they have spent far too much time on their backs on “butcher paper” (29). We who deal with issues such as Endometriosis and her cruel cousin Infertilitybecome used to the paper’s slide and shine. This shared experience works to convert many of Onusko’s poems into tiny kindred confidences. For example, “The Patient” (“Five doctors each propose / five different diagnoses / none of which are confirmed / by the traditional battery of tests” [24]) considers the maddening powerlessness of woman rendered into medical problems to be solved. “In the Surgical Theater” translates that same powerlessness into an uncomfortable kind of positive: “How efficiently / they adorn me with wires, / how tenderly //the resident takes my hand / in hers, the near miracle / of not being able to //think, for once…” (41).

Onusko calls on landscape as metaphor for the ailing body. In “Pathology,” she delivers endometriosis (a condition whereby tissue that usually lines the uterus travels and adheres to—and often compromises—other abdominal organs) as “a chain of volcanos / erupting on cue / and rivers of lava / sliding across organs / then hardening into rock” (18). This is perhaps the best description—medical or creative—of endometriosis I have encountered. I was at once confident of Onusko’s credentials: I felt she and I had walked the same streets.

And yet, she doesn’t drop us off at our destination immediately: in section one, she has us travel through our young lives when we were perhaps oblivious of the challenges to come. In “I am my Careful Projections,” she urges us to “[a]ppear sincere” in our struggle with youth’s pretense (12). Later, the poem digs in to the problematic nature of such sincerity:

When the unsummoned presence of the past nears
silent as light and just as omnivorous
don’t flinch. Yes, I was once Miss America,
and it was disturbing, but the scepter felt firm in my hand,
so I smiled….. (12)

If the first section of the collection deals with preparation for womanhood, then the last is one that moves towards its resolution: we shift from “A thrush          spitting wet concrete / into a nestful of          open mouths” (13) to “…My body, attempting affinity, achieves a simultaneous present. I have never been as happy as this, as this” (67). And yet there is a tempering or blurring of this happiness. In “Origin Story” where the narrator’s daughter is handed over quite gloriously as “descended from amber /…washed up on the shores of the Baltic Sea” (70), the daughter is presented as a positive…yet she is “descended from amber”—fossilized tree resin which has a tendency towards beautiful entrapment—and she is “washed up”—a phrase that might suggest a loss of purpose or value.

Reading PORTRAIT OF THE FUTURE WITH TRAPDOOR pushed me to re-examine my relationship with my own body and how it had affected my understanding of my role as “woman.” The title poem hands over solid advice to us all:

Your role is neither hero nor victim, but witness
the one who converts what is into what was and lives
with the memory of it.” (8)

Bunny Goodjohn, originally from the UK, is the Book Review Editor at Mom Egg Review. She is the author of two novels, STICKLEBACK AND SNOW GLOBES (Permanent Press 2007) and THE BEGINNING THINGS (Underground Voices 2015). Her first poetry collection, BONE SONG was published in May 2015. She teaches at Randolph College in Virginia. www.bunnygoodjohn.com