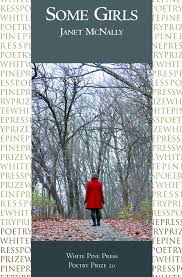 SOME GIRLS blends of contemporary and ancient story. McNally bends time on purpose, lending myth into women’s stories and humanity to myth. McNally remembers what is worth remembering and offers luminous characters to do the telling. With smart, witty, rich imagery she makes heroines of all of us and feeds the hungry in-between spaces in the stories we’ve been told. Here, we find Eurydice listening to the Rolling Stones, Eve experimenting in ornithology, and a contemporary mother feeling a whole ocean move as her child grows. McNally tells these stories and more with keen insight and agility.

McNally’s poems primarily concern themselves with femininity. This book is an artifact and exploration. The stories are laid down one after another, not unlike tarot cards, to reveal elements of the book’s subject without ever revealing a complete picture. In fact, the exploration is incomplete but intimate; it offers almost physical accounts of character’s lives and possesses both an emotional urgency and imagistic quality. Poems are traversed like dreams or paintings strung together with flowers, gems, music. McNally’s consistent voice and balance between narrative and image serves and strengthens. Throughout, the reader runs the risk of losing footing in lush images but then is adeptly grounded—evidence of McNally’s dexterity and deep knowledge of even her most inventive of narratives.

McNally’s often places mythical figures in unexpected, contemporary settings. In “Eurydice and Orpheus Stay Up Late” the reader finds these figures in a diner eating French fries. The focus of the narrative stems from Eurydice’s interior. Everything she does has both concrete and intuitive reasons. McNally offers her characters a radical wholeness and a dreamlike nonsense that delineate a creative development of identity. In the concluding lines, “The railing waits, wearing/ a filigree of rust, but she holds on to him,” there is a deep satisfaction in the beauty and authenticity of the words (25).

Another poem, “Leda in my Kitchen,” expresses a more complex view of a mythical character and greater empathy for her. Here, McNally uses wrenching detail to describe the impact of Leda’s assault by Zeus. “She held the curve/ of her belly and I saw her fingers/ were skin and bone again…” and “We pretended/ the egg in front of us had lost its terrible promise/ cradled no life in its calcium shell” (27). This telling echoes not only the past but, undeniably, the present where women support one another through experiences of assault and the ramifications. McNally’s book balances this against other experiences of the feminine. She prioritizes a sisterhood between women. Figures like Leda, Demeter, or Rapunzel are in direct relationship with the reader. McNally suggests that we are not only nurtured by them but that we may, by telling their stories, nurture them in turn, offering the support we wished they had received.

Certain questions are implied in her McNally’s poems. Namely: What do stories do to us? How do they do it? One poem, “Trompe L’oeil,” suggests an illusory set of answers. Trompe l’oeil is a painting method used to trick the eye into seeing a painted subject as three-dimensional. McNally has said that her desire to revise these stories came, in some part, from raising a daughter. What three-dimensional characters would her daughter have when building her view of the world? Without the sort of complex telling McNally does in her poems, there are only two-dimensional fairytale heroines more like paper dolls than individuals. This internal division between what is expressed, historically, and what is unexpressed effectively splits a character in half – a status quo as exhausting as it is frustrating. This poem closes: “you can saw a girl in half/ but then you’ll have two half-girls, and/ what the hell good is that?” (45). McNally wants more and, here, she writes it.

Throughout the book, there is a relationship between the speaker and a troubled friend, Maggie. Maggie is a vibrant figure who goes in and out of coma throughout the book. She is equal parts friend, martini-drinker, kid at summer camp, and Sleeping Beauty, burning awake against dull, debilitating slumber. The speaker is her friend and witness, staying with her and with other mythic figures to breathe life into their stories as she creates life as a new mother. Finally, that is what these stories do – they make room on the page for new life, new and bristling awareness. These are not just SOME GIRLS. They are all us, more imaginatively and clearly rendered, worth reading and seeing fully.

Meg Reynolds is a teacher, writer, and artist living in Burlington, Vermont. She holds her BA in Art and English from Bates College and MFA in poetry writing from Stonecoast at the University of Southern Maine. Her work has been published in Est, The Salon, Prelude, and Prime Number Magazine. She is the co-director of writinginsideVT, an organization that offers supportive writing instruction at the Chittenden Regional Correctional Facility as well as the co-founder of Pine Street Poets whose self-titled chapbook was recently published through Honeybee Press.