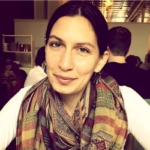 from A Library of Light

When I was small and still living with her, I wanted to write to all the dead people I had never met. I wanted to talk to those concentrations of energy I felt in the hallways of my house, my school’s stairwell, the damp corners of my yard. What I wanted to say couldn’t be arranged so I’d stay very still and reach my silence outward like a tactile glow, a static reaching to communicate with passing frequencies. Tonight, I’d like to write to a dead woman at the bottom of this ocean in that same way. Sending out a kind of undercurrent that scripts itself into her, into me.

I want to know if writing can raise the dead in me. The act of lifting: myself, a memory, a mother. To rear. To make higher. To restore to life. A voice. The physical sense of. Children, to bring up. But I won’t have children. I think of the phrase: I was raised in. I was raised means brought up there. Brought into being. Bring me up. From sleep, from bed. From one’s body. To get to one’s feet. From one’s grief. Get up from the table. Be fit. Be proper. To travel. To journey. To rise from the dead. To originate (from). Occur, happen, come to pass; take place. I write a piece of rising ground. To get a rise out of (someone). My mother has. Taken place. Has. Come to pass.

What is a ghost? A residual vibration, some desire left behind in the wake of a physical departure. Grief is a ghost. Light is a ghost. Language. I’ve not been haunted by my mother but sometimes I hear an urgent crackle in the corner of the room that holds me.