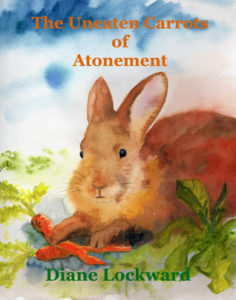 – Diane Lockward, author of The Crafty Poet: A Portable Workshop, has had poems featured in Garrison Keillor’s The Writer’s Almanac and on Poetry Daily and Verse Daily. She is endorsed by Lee Upton, poet and professor of English at Lafayette College and by K.S. Byer, Poet Laureate of North Carolina, among others.

In her fourth poetry collection, The Uneaten Carrots of Atonement, Lockward promises terror transformed into moments of beauty. I find that beauty rendered in various ways. First by the layout of the poems on the page. (“In My Bones” bears the shape of a bone, for example, and “An Epistemology of Promiscuity” appears to zig-zag on the page.) “The Morning After” has a satisfying appearance, with its indented lines, though the poem’s imagery is that of a saddened, empty woman bereft of her lover.

Lockward’s sestina “Why I Read True Crime Books” is developed so skillfully the reader is unaware of the carefully repeated and exactly prescribed line-end words (70). There’s terror within this poem, (“It’s not my crackhead boyfriend creeping up the stairs / to slaughter my parents in their bed.”), but its beauty lies mainly in the poet’s wielding of the form, i.e., its six lines in each stanza, and its envoi, laid out to a “T.” I like that Lockward felt free to substitute “ours” and even “horrors” for “hours”, and “stares” for “stairs” in one stanza, thereby yielding a richer account.

A narrative poem “Two-Door Mailbox with Gin” nearly crosses over and becomes a prose poem: “I wondered whose lips / had touched the rim, / whose fingers had lifted / the glass, what sorrows / had sunk to the bottom… ” (52). We find a bit of magic in her actual prose poem “The Morphology of Mushrooms,” however, which reads easily and delights with its language (40).

In “Sweet Images,” a girl, a teenager perhaps, drools over cookies and cakes but is counterbalanced by the “hunger” of a more mature woman:

But that interior girl, she has desires,
too. Another kind of hunger burns like fire—
to be svelte like the women she admires

in magazines and movies, women who dine
on lettuce and sip a glass of wine,
who wave away the dessert tray and do not pine… (49)
This poem’s title suggests a double meaning, the inviting images of cheesecake and tiramisu vs. the cover-girl-style image of a slender sexy body. Lockward achieves delightful humor, especially in the final stanza’s final word:
She envisions herself in glossy photographs,
her hair wind-tossed, sweet words and laughter,
a bottle of Chardonnay, a shared bowl of roughage. (50)

As always in reading poetry, I am intrigued by the personas of the poems, and I had to resist assuming each poem represents the life of the poet herself. I treasure the tenderness portrayed in “For the Love of Avocados” but shake at the sinister hatred in “Shopping at the Short Hills Mall,” in which a husband is disposed of “in an ecologically responsible manner” (nn). A shocking starkness also appears in “Warning” and a kind of bi-polar disorder in “Morning Walk,” in which the persona curses nearly everything.

The language of “In Defense of the Cashew” is elegant in its reference to poet Elizabeth Bishop’s experience (both with the cashew and with her lover), again with double entendre in evidence: “so easy to take what’s offered, so hard to turn away from the misshapen moon” (31). (This poem, by the way, was not included in the Contents page, a minor negligence in the editing that was otherwise quite thorough.)

Finally in the penultimate poem, “Signs,” the poet presents a scene of reconciliation in which we read, “those you have hurt / with the hard shell of your silence will somehow / still love you…” (93). It would have been a fitting close to this collection of fifty-two poems, assuaging some of the bite, hatred, and cruelty conveyed in such poems as “After,” “Coloring,” and “How I Dumped You.”