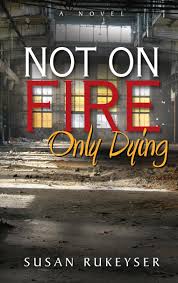 – Susan Rukeyser’s debut novel Not On Fire Only Dying turns its perceptive gaze on those we so often want to ignore, or bestow our fragmented attention upon only when they make their way into the evening news report.  The novel begins with just such a story. Lola, a woman with a history of mental health and addiction issues, claims her newborn baby was kidnapped while she drank alone at a dive bar. The only evidence of an infant is the empty baby stroller on the sidewalk. No one has seen the baby, whom Lola claims she delivered at home, although she can’t remember when. No one has seen Lola with the infant boy she named Emilio, even though she returned to town weeks ago.

The unlikely, and compelling protagonist, ex-convict Marko, is navigating Schendenkill, New York after twenty years on the inside for attempted murder.  An unlikely hero, Marko lives by his own code, and while he’s a drug dealer, he’s also a defender of the weak, an authentic friend to Schendenkill’s newest transplants Mary and Wade.  Mary is from Oklahoma, a ruined real estate agent who can never return to the wide-open spaces of Oklahoma, no matter how heart and home sick she is. Wade is only in Schendenkill because he followed the woman he loved. He’s been dumped, but he’s willing to put down roots for the first time in his life. The three of them—Marko, Wade, and Mary—form an unlikely alliance, cemented by their shared understanding of loneliness. While Marko is a drug dealer who has to meet with his parole officer with someone else’s clean urine strapped to his thigh, he’s also a man trying to make sense of and tame his fluid rage and enormous love for Lola. Lola, whom Marko refers to as “ his lady” and “my lady” and for whom he quests for her honor, wears a signature duster as an “exoskeleton” or modern armor as protection against the world. He knows what the world sees when they look at him. He also know what they see when they look at Lola:

She’s a mental patient, maybe a drunk. She has three older kids, long since removed from her custody. She’s hallucinating a baby now, or making him up on purpose, maybe for attention…The cops are sure they know her. But Marko, who was as close to Lola as anyone, who still believes he knows her heart, who remembers every inch of her skin—he’s not sure of anything. (22)

This novel exposes the rich emotional landscape of Schedenkill, which “clings to the western bank of the Hudson, about two hours north of Manhattan” (21) and the equally fertile internal geography of Marko as he makes sense of returning “home” and seeing it with the detached eye of an outsider. This engaging novel’s strength is the exploration of seeking a home in place and in people, living in community, forming a family, and finding not only redemption, but acceptance as well.

Clearly, Rukeyser knows the New York Hudson Valley well, but she’s also a keen observer and recorder of the intricate workings of the human heart. She reminds readers, again and again, to look deeply. What we see initially, and judge quickly, then dismiss, so often does not reveal the depths, nor the dark and glorious currents at work beneath the surface.  Rukeyser, in her exploration of these round characters, forces us, as readers of literary fiction, to ask what we are willing to forgive, to live with, and to do for ourselves and others in the name of messy, imperfect love.

Barbara Harroun is an Assistant Professor at Western Illinois University. Her most recent work is forthcoming or appearing in Fiction Southeast, Watershed Review, Rappahannock Review and Iron Horse Literary Review. Her favorite creative endeavors are her awesome kids, Annaleigh and Jack. When she isn’t writing, reading, or teaching, she can be found walking her beloved dog, Banjo, or engaging in literacy activism and radical optimism.