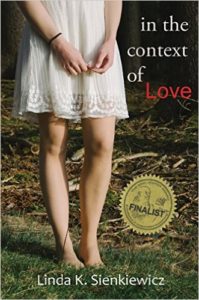 – Angie: “I believed it was best to jump headfirst into what you are most afraid of. For me, that had become a certain type of man: dangerous, huge, and hairy, a skewed vision of my birth father. I went after the spitters and snarlers. I attracted them the way rancid meat draws flies…” (119)


There is no doubt that Linda Sienkiewicz knows families. Whether writing the Hungarian Vadas nest of “spitters and snarlers,” the Schirricks and their barely concealed animosity, or the Lowsleys where love teeters on an edge honed sharp by lies, Sienkiewicz hands over detail that allows readers to see what needs to be seen and depth that keeps everything very real.

It is this fine and intricately woven thread of family dynamics that makes IN THE CONTEXT OF LOVE relevant to readers, its scenes somehow lifted from our own experience. After all, who hasn’t encountered a mother desperate to save a child from the pain of bad choices? Or a father who, when truth arrives, is loath to take on the challenge of reassembling an honest relationship from the hard ground up? And what girl wasn’t tempted—at least once—to ignore warnings about boys like Joe Vadas (“the Gypsy King [whose brothers]leave bastard babies all over town” (17)) when that same boy’s kisses “tasted like freedom” (27)?

Angie Lowsley is one of those girls, protected from the perils her mother knows to be out there. It’s a protection our protagonist sees as shackle rather than shield, and she is desperate to swap its cold and heavy tether for passion and excitement.

IN THE CONTEXT OF LOVE is written as a semi-address by Angie to the absent Joe—absent since a liaison in the school gym. After one of the coaches finds the lovers in flagrante, they are hauled off to the principal’s office. Angie is suspended and Joe leaves town, never to be seen or heard from again. Confined to the house and going a little crazy, Angie spends an afternoon searching for her birth certificate. The document shakes out family secrets that fracture everything held up to be true. Unable to reconcile family reality with the fantasy she was brought up with, she decides to leave home to begin a harsh and sometimes harrowing quest for her own truth…and perhaps subconsciously for the missing Joe.

Issues of rape, addiction, domestic violence, and the crazy way that abuse can sometimes be rebranded as love are the backdrop to Angie’s rebound affair with chauffeur and soon-to-be convict Gavin Schirrick. She imagines she loves him…maybe as the dog-eared ticket out of town and away from the memories of what might have been had Joe not left, and maybe as the eventual father to her children. But either way—and yet again—love doesn’t last, and Angie is left alone, this time bringing up two kids.

IN THE CONTEXT OF LOVE is a well-integrated treatment of love and family. Sienkiewicz’s decision to cast the narrative as a loose address to Joe affords the story a layer of suspense that remains wonderfully unresolved until the novel’s very end.

Sienkiewicz has written a gritty read—real and sharp—that unceremoniously prises the roof from the American family of the 1970s.

Bunny Goodjohn, originally from the UK, now lives in the USA. She is the Book Review Associate Editor at Mom Egg Review and the author of two novels. Her debut novel, STICKLEBACKS AND SNOW GLOBES (Permanent Press), was published in 2007. Her first poetry collection, BONE SONG (Briery Creek Press), was published in May 2015.  Her latest novel, THE BEGINNING THINGS (Underground Voices), officially launches in January 2016 and is already available at Amazon. She teaches at Randolph College in Lynchburg, Virginia. www.bagoodjohn.com