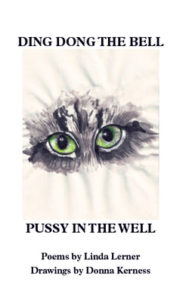 – “‘Ding Dong Bell’ is a phrase Shakespeare used in several plays. In the original lyrics the cat was left to drown.” (8)

DING DONG THE BELL PUSSY IN THE WELL is a collaboration that uses nursery rhyme as springboard from which to launch tiny commentaries on contemporary life.

The poems and drawings that form the chapbook’s structure might take the reader to a consideration of that old chicken and egg riddle: Which came first—Kerness’s drawings or Lerner’s poems? Are the poems ekphrastic…or are the poems illustrated? Other questions arising from the partnerships might focus on connections: What is the linkage between this drawing and this poem? Between this one and that one?

When the connection is more tenuous—for example, with the Aubrey Beardsley-esque drawing and the poem “We” (springing from the nursery rhyme “Hark! Hark! The dogs do bark)”—the reader is allowed the space to form her own associations (7-8). For me, the poem’s lines “we are the ones often mistaken for beggars / who’ve marched, protested on lines / running off the page to camp out / on the muddy earth” and the partnering image of a woman wearing a headdress which appears to be adorned with (for me, at least) female genitalia, hands over 1980s images of the UK’s Greenham Common Peace Camp, where women spent rain-soaked months under canvas protesting the deployment of cruise missiles. But this leap is mine: other readers will find that the relationship between image and words takes them to entirely different places.

The marriage between drawing and poem is tighter, more enduring perhaps, on pages eight and nine. The drawing here is of a cat stretched out at the bottom of what appears to be a dry well with the sky a mere strip running above its bricked lip edge. The drawing is captioned with that poor pussy in the well quotation. In the poem on the facing page, Lerner hands over a crowded subway car and a magical woman pulling a cat from the depths of her handbag. Her travelling companions “look down uneasily at their cell phones” but one traveler, fascinated, “feels this cat eyed being…nestled against his mind” as “everyone disappears as though / sucked into a great hole…”

Of course, these pages hold women and mothers. In the same way that woman (as crone, as mother, as lover, as innocent granddaughter gathering flowers in wolf-infested woods) populates the picture books of our childhood, Lerner and Kerness’s women look out—in both drawn and written line—from most of DING DONG’s pages. Kerness’s women are fleshy, real, and self-aware. Her drawing of a woman’s head as accompaniement to Lerner’s “An Old Wives Tale or a Rip Van Winkle Story” is alien with its hollow eyes and cracked-open head (22). Lerner’s poem hands over woman as daughter and mother, both inspecting the effect of time on sense of self: Lerner shows us the aging mother with a self-portrait asking “who’s that old woman in the picture…?” while a daughter looking at her father asks, “who’s that man hunched over a cane…/…who’s that angry man…?” (23).

These poems and drawings prompt slippery questions. DING DONG THE BELL PUSSY IN THE WELL requires its readers to engage, to interpret, to consider relationships between words and images, between traditional children’s texts and contemporary literary constructions. For those prepared to do the work, the collaboration provides a wealth of material: intriguing pencil drawings; poems which confront the complicated nature of the everyday; and traditional nursery rhymes which cannot fail to layer, sometimes uncomfortably, our own childhood memories with Lerner and Kerness’s modern day interpretations.