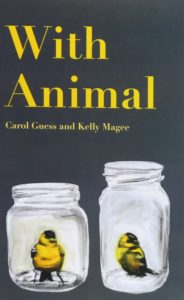 is a collaborative book of short stories, written by Kelly Magee and Carol Guess, that imagines the implications of humans who become pregnant with animals. Pregnancy and childbirth are times when surreal and sometimes unexplainable things really do happen, so it was a natural extension to take these stories into the realm of magical realism. It’s pretty common, for example, for women’s hair to get thicker during pregnancy, so if she was pregnant with a sheep, it seemed to follow that she’d grow fur; women crave specific and sometimes odd foods during pregnancy, so if a woman was pregnant with a dragon? Well, she had to crave fire. As we kept writing, our interpretations of what these kinds of pregnancies – and these offspring – would look like got wilder and wilder. There’s a woman with hybrid twins, one human and one horse, a man pregnant with a kangaroo, a twenty-first century Virgin Mary reimagined as a queer single mother giving birth in a petting zoo…and more.

The writing process for these stories was for each of us to write a story half and then pass it along at a designated time each week, so the individual stories are all collaboratively written. This pace was incredibly fast, but also liberating. The energy that came from writing so quickly – when that day of the week rolled around, we had to stop tweaking and worrying over a story and let it go – is the perfect antidote for any writing habit that had stalled out. I (Kelly) am a single mom with two young kids and a full-time job, so writing time is often hard to come by. It’s so helpful to have a deadline, and also to have someone who is not just interested in your writing, but someone who has really invested in it as well. It was a highly productive way of writing, and something I’d recommend to other writers.

Below is an excerpt for one of the earliest stories we wrote, “With Human.” Here you see some of the central ideas of the collection, including the one that, when writing about pregnancy and birth, the body, and the gendered body, tends to take center stage. The stories in this book complicate mainstream ideas about gender, sexuality, and family as they exist in human society; but then there’s the animal world, which presents endless possible mutations of these relationships and endless narrative opportunities. We gravitated toward complicated characters who want things they’re not supposed to want, who are outliers, shape-shifters, and rebels. When writing human-animal stories, the difficulty of communication across species becomes paramount, and this is reflected in the excerpt as well. It’s also a good metaphor for the difficulty in communication we all feel: you know what you want to teach your children, but you have no idea how to do it; or you fear you are teaching them the wrong thing; or you worry you don’t understand them, or they you. All we have is this strange, fallible system of language, and I loved the way these stories provided a vehicle for writing about attempts, successful and failed, to communicate among family members.

When she learned that the baby was human, she felt disappointed. It rattled inside her, fearless and furless, alphabet of bones and thumbs.

An animal pregnancy was all soft tongues, lapping; pink silk and decoration. Multiples, so they took care of themselves. They nested inside each other, fully formed at birth.

It wasn’t her fault, her husband reminded her. His DNA decided things. He was the carrier; he was the male. Still, she talked to the baby animals. Named them as if she might keep them.

Of course mothers could only keep human infants. Baby animals were whisked away. Her first three pregnancies were bundled in yellow blankets and disappeared down the hall with the nurse. Of course they reassured her that her kittens, puppies, and pandas were well-loved; cuddled and coddled. Of course she didn’t look at the smoke that flew over the hospital, crooked gray birds.

This time it was human, so she could keep it. Her husband would name it, reward her with gifts. She would be given a pink or blue blanket, press a heart to her chest, nurse a face when it cried.

Where were her animals? Where had they gone?

The little human baby snowballed inside her, colder and harder, collecting
sharp stones.

Kelly Magee is the author of Body Language (UNT Press 2006), winner of the
Katherine Anne Porter Prize for Short Fiction and With Animal, co-written with Carol Guess (Black Lawrence Press 2006). She teaches in the undergraduate and MFA programs at Western Washington University.

Carol Guess is the author of fourteen books of poetry and prose and is Professor of English at Western Washington University.