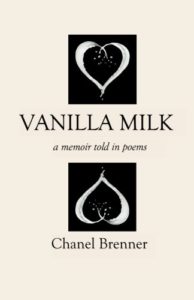 Grief is heavier than concrete. A mother’s grief is fierce, dark and insatiable as the pit of hell. That’s what I learned from Vanilla Milk, Chanel Brenner’s new memoir in poems about the death of her six year old son, Riley, from a ruptured AVM (arteriovenous malformation, a tangle of abnormal blood vessels) in his brain.

The night Riley died, Brenner sat down at the computer and wrote a poem.And kept on writing poems. When she went to the supermarket. When someone asked her how many children she had. When Geoffrey the Giraffe from Toys ‘R’ Us left a birthday message for Riley on her answering machine. Instead of tears, she wept words.

There are several themes that stay with me. First, the inconceivable loss of the child, Riley, a sweet blond youngster who liked action figures, stories about Smiley Brewster, and vanilla milk better than chocolate. Second, the mother’s almost laser focus on Desmond, the younger son, whom she fears she will crush in her obsession. In “I Have 2x the Love for 1 Child,” the mother says,
I worry that the weight
of my love is too heavy.

I see my son hunched over
carrying my grief

like a load of stones.
I worry he’ll learn

Desmond carries his own particular grief for his dead brother and is aware, at a very young age, of the frailty of life and the vulnerability of his parents. He brings them gifts of love, attempting to comfort them: “Desmond stands on his bed,/hugging both of us at once,/stretching his small arms’/whole length, as if/ there’s not enough of him/ to meet our needs. . . . “(“Enough,” p. 54). And we see his resilience, his assertiveness, when his mother tells him he can make a potholder just like his brother did and Desmond replies, “I’m Desmond. Not Riley” (“Not Riley,” p. 28).

The intimacy of these poems brings us face to face with the mother’s unbearable pain, which somehow must be borne. We feel the sensation she feels of floating above her body when a friend confides she’s pregnant (“Out of Body,” p. 40). We feel her anger at the abandonment of friends who avoid her, as if losing a child is contagious, or who make insensitive comments such as asking is she’s feeling lighter, as if her grief is a burden to them.

A poem is not a child, the mother reminds us: if Riley were eight, he would have a vanilla birthday cake but, instead, he is a ghost, a “fucking poem” (“July 28, 2012,” p. 76). And yet poems are like children: they are born from the desire to create. Poems are embodied feelings; they give structure to inchoate longings and chaos. They bear witness to our darkest hours, our most unspeakable thoughts and fears. Through poetry we know ourselves and also the tremendous vulnerability we share with all humans on this planet. The mother worries she will not be able to stop writing poems about Riley, because the poems are not only the embodiment of her grief but also the expression of her love.

The final poem in this collection, “His Heart Takes Flight,” is the mother’s response to the transplantation of Riley’s heart into a young girl in Vancouver:

I imagine the girl
who will inherit his heart

in a white lace nightgown,
her small body supine

on a feather bed,
her mother gazing skyward,

This closing image of benediction seems to speak of healing. It was not easy to let Riley go, to let his organs be parted from his body and scattered in others. But even in her deepest sorrow his mother is compassionate toward the suffering of mothers and their ailing children.

Nancy Gerber is the author of Losing a Life: A Daughter’s Memoir of Caregiving (Hamilton, 2005), which explores the impact of her father’s stroke on her and her family. Her most recent book, Fire and Ice: Poetry and Prose (Arseya, 2014) was named a Notable Book in the Shelf Unbound Indie Competition.