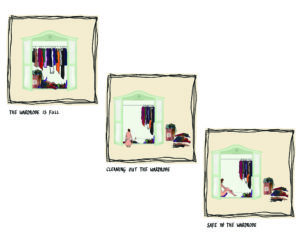 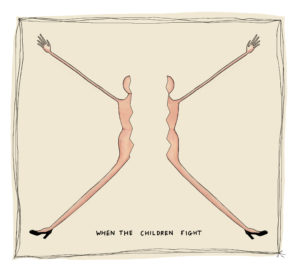 When The Children Fight 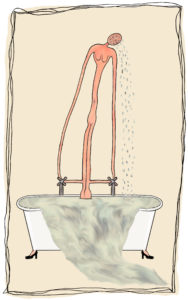 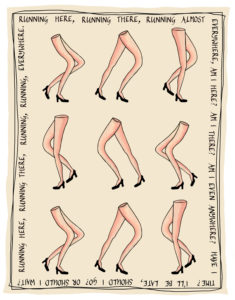 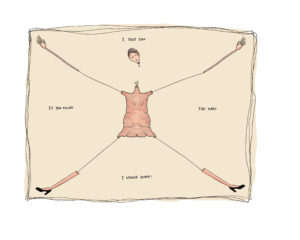 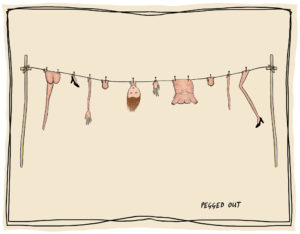 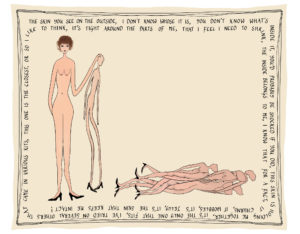 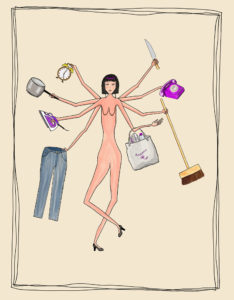 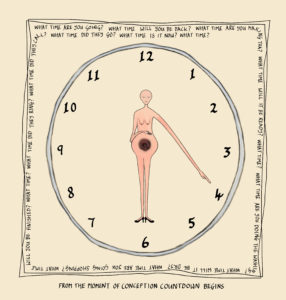 Choice In A Pinny I have sketchbook after sketchbook of image ideas ….The set of images that are relevant to women …was started in response to being a very tired and frustrated mother and it was, in truth, the only way I could cope at the time. The first one hundred and fifty nine were completed in a period of around four weeks. The drawings are raw – by that I mean painful – they were in direct response to given situations – reactionary. I guess it stopped me from screaming at the children – you know those times when one of the children does or says something that you wouldn’t have been upset at the day before because you were in a better mood or less tired and your brain is trying to rationalize your response but in reality the response that is vocalized is much harsher than expected? I was trying not to be a horrible mother so I used art as my outlet.

So each image is a sketch really – the drawing was quick and unrefined – I guess the terminology could be ‘unpolished’ (maybe as you read further down keep that word in your mind). I would finish, turn the page of my sketchbook and get on with the next one.

I put the sketchbooks away and didn’t look at them for a few months but as time went on and friends came to air their own frustrations, I showed them one or two relevant images in order to help them know they were not alone in the irritations of motherhood and that their feelings were universal. I came to realize several things:

•They transcended time and place – what I mean is that motherhood is supposed to be this wonderful thing – always has been and always will be but it isn’t. Yes of course we love our children deeply but goodness me, it is a hard and frustrating occupation;
•As my background is both creative and academic I found I had used imagery I had forgotten about from leaning about the classics and antiquity and had assigned goddesses and their symbolism into contemporary situations;
•That they have an authenticity of experience, that permits humour and narrative – none of us want to be seen in the light of being a bad mother so we stay silent but the images give affirmation that it really is ok to be able to talk it out;
•That they open narrative about other similar situations in which we find ourselves

There is one other thing I realized and that was that I would have to be very careful to whom I showed certain images, as I did not want to be in the position of making someone face their own grief. At that point I closed the books and put them under my bed for several years.

I re-visited them maybe two or three times but felt that my drawing was appalling and I wasn’t a very good artist at all. I took them out again in 2007 and found that they were still valid as communicative imagery but the drawing was rubbish. The feedback I had from a couple of people (men) I really took to heart. They said that they were very uncomfortable with them because they were naked and did not have hair …….. I sank. I then thought that maybe they were right and to an extent they are if they are to be seen as illustration. The fact that they are naked can be an immediate barrier to reading the poetry and the image itself. It then serves no purpose whatsoever if it cannot have a small chance of engagement. I had just started to learn how to use a Wacom tablet and decided to scan them in and ‘polish’ them. I could correct spelling mistakes and indeed ‘tone up’ the bodies. I have a complete record of the changes from the unpolished to the polished. So for example: 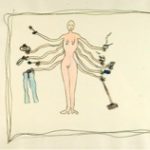 This is Kali as a raw image – unpolished. This is the polished version.

At first glance one would think that is a better image as all features are in place, the symbolism is correct and ok, so she is still naked but she has hair – which seems to make her much more acceptable. We recognize objects; jeans, iron etc.

For example, to take one element – the alarm clock is a shape we accept. Only on closer observation do we see that the clock hands are women’s arms and hands and are pointing to five o’clock, tea time; that the alarm bells on the top are breasts and the hammer is about to go off and yet again demand food; that the feet are women’s feet, almost buckling under the weight; and the clock itself has a handle and can be carried anywhere by any member of the family to fulfill whatever demand they decide. 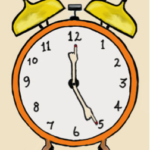 The main thing is that most barriers have been removed – I now have an image that can be engaged with, on whatever level. It is full of symbolism but if the viewer engages briefly they will understand and it matters not what is included – they might re-visit in a quieter moment or it may be sufficient for them to say ‘yep – I know that one’.

One would then think that the original image is no longer useful but I find quite the opposite is true and both now have validity in their own right but placement is important. The original is drawn with a deep sadness, a heavy weight – the hips are lower; the arms are trying so desperately hard to stay up but are failing and becoming longer; the breasts are drooping and leaking; the face is one of total exhaustion. This image belongs in a gallery – it is the truth about how we feel and it is not necessarily pleasant.

Art has many functions but we are losing the truth of its purpose: communication, teaching, sharing and so much more – we don’t want to engage unless is it comfortable. We choose our images to go with our curtains and our furniture and sure, no one wants to wake up in the morning and have to face a Käthe Kollwitz mother mourning over her lost child – we wouldn’t survive the day. In this country we have apples, on sale in our shops, that are graded so they look good on the shelves – no blemishes, nicely polished, labeled. They cost more to produce, the producers get less and we forget the taste of an apple that is straight from the tree – a bit lumpy in places, not quite the colour it should be but oh how delicious and juicy. It doesn’t look as good so it is rejected. It is a strange world. Our life as mothers, for it is a life long journey, cannot be sanitized or we will all suffer more and more.

Anna Lawson is an artist living in a small ex-mining village in the North East of England. Born into a creative environment, where all aspects of the arts were actively encouraged, her work resonates with the vast majority of women who are all too familiar with the bewildering calls upon their femininity to problem solve both on a practical and emotional level.

Based on her experiences as a working mother, a lecturer in Fine Art and Art History and an artist, her images communicate frustrations and triumphs and use the allegory of mythology and the classics as a means of communicating weighty, emotional but universal experiences of women which have transcended time and place – because they are part of our human condition.  —Richard Hardwick, author of Kicked Out and Andalucia