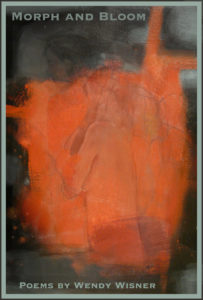 – Wendy Wisner is a writer and a lactation consultant, but the driving force behind her poetry is her motherhood. Her poems offer snapshots of bearing and birthing, being sister or mother or daughter. Generations of family stretch across the pages of Morph and Bloom, as in “Weaning: Burial”:

“The night we buried my uncle was the first night
my son fell asleep without nursing. He didn’t even ask.
…
Back at the hotel, I thought:
I am the mother of a son who will one day die.”

The collection begins with “Eve”, a poem that wraps together the biblical Eve, birds on a fire escape, and the narrator to illustrate the desire for conception. The poem is yearning for a child, and is answered in slow fullness: the next poem, “Letter at Six Weeks” introduces the narrator’s pregnancy, a wish fulfilled that is perhaps more than asked for. The narrator says “Maybe it isn’t sickness I’ve felt these weeks / but a love so bewitching, taut, and tingling / I need to hide” and soon follows with “When it rains, you sleep. / My body sags with your slumber / and I fear I have lost you.”

The book is split into sections: “Eve” stands alone; “Letter at Six Weeks” heads a section devoted to the narrator’s burgeoning child-belly that ends with water breaking in “Christmas Eve”; “Boy” begins a section about her newborn son and the newness of parenting—good and bad—that concludes with “Benjamin Sleeping” at one year old; “Dream of the Mother” and “The Story of Spring” bookend a section that juxtaposes blossoming spring and a young boy learning to speak with cold and an eerie sense of loved ones missed and missing; “On His Second Birthday” muses about a second son, but is quickly followed by two pieces about a miscarriage, and the section ends with “Even now, the lost baby”; “Weaning: First Day of School” leads us into the last section, and “Weaning: God” ends it, with “two more weeks / before my next egg pops / … / please god let’s do it / again / again / again”.

Threaded throughout are the dual themes of loss and life-giving. Early on, in “Fresh Snow”, the narrator tells the reader “Each time I tried to save my sister / from our life, I failed.” Later, in “Dream of the Mother”, this: “The touch was real / but when I wake, my husband is gone,” … “All morning I feel his hand / cold and living against my skin.” Yet, in “The Story of Spring”, the narrator shares some of her closeness with her first son:

“You’re supposed to wean
before they can ask for it,
but when he comes to me,
wet eyes wide, a lush M
slipping between his lips,
I give it to him before he asks.”

In “Letter to My Father”, the narrator muses on absence: “I thought of you yesterday in the frozen food aisle at the grocery store. / I felt for a second what it will be like when you die / and wondered for half a second if you were dead already and I had forgotten.” The collection is shaped as much by the absence of her father and sister as it is by the presence of her sons, each section seeded with a poem or two that recalls a distant father or delicate younger sister.

In the end, what I remembered most after reading this collection, was the breastfeeding. The narrator of the poems nurses her first son into his fifth year, until he weans himself; this is an intimate thing to share with her readers. The prospect of breastfeeding so late may not be for many, but this collection of poems is a very honest look at the bond between a mother and her first child, one that brings out all the joy and sorrow of a child’s first years.

Tessara Dudley is a poet, educator, and activist. Her writing can be found online at Black Girl Dangerous, and The Prospect. She recently published a book of poems, Fallen/Forever Rising, and she blogs at http://tessaradudley.com