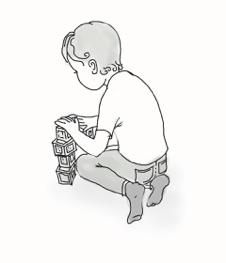 Max sat on the floor of the den putting the finishing touches on his Lego castle while he listened to his mother clanging pots and pans in the kitchen.  Today was Topsy Turvy day.  On Topsy Turvy days Max’s father worked late and Max and his mother ate pancakes for dinner.  Pancakes were Max’s favorite.

His parents argued a lot.  Max didn’t know why but he thought it might have to do with something called The Age Difference.

One day Nana came to visit and he listened to her and his mother talking in the kitchen.  His mother thought he was playing in the den but he was hiding just outside the kitchen door.

“We used to have so much fun together.  I don’t know when. . .“   Max waited but his mother did not finish the sentence.

“It’s the age difference!  What did you expect, Carrie?  Twenty years!  A generation, a lifetime!” said Nana.  “And besides, you know he didn’t want. . . .“  Nana’s voice dropped to a whisper, and Max couldn’t hear what she said.

Max was putting the flag on top of the castle when his mother called him in to dinner.  Max’s mother stared at an invisible spot over Max’s head while Max took the bottle of syrup and poured a large puddle on his plate.  Then he dragged the pancake pieces through the maple sludge, pretending they were boats.

The phone rang and Carrie jumped to answer it.  Max watched while his mother’s smile turned to a line and then an O as she smashed the phone back in the receiver.  Sobbing, she ran to the bedroom she shared with Max’s father and slammed the door.

Max got down from his chair and crouched on the floor outside the bedroom.  He could tell his mother was crying because he heard muffled noises that sounded as though they were coming from very far away.

After a very long time, his mother opened the door.  Her face was wet and streaked with long black stripes.  She knelt down and drew him to her, burying her face in the top of his hair.  “Your father isn’t coming home tonight,” she whispered.

Later, after he had his bath and put on his dinosaur p.j.’s, his mother said she would read him his favorite book, The Runaway Bunny.  Max liked this book because wherever the bunny went, the bunny’s mother followed.  Sometimes Max’s mother asked if he wouldn’t rather hear The Cat in the Hat or If You Give a Mouse a Cookie, but Max always said no.

When the story was finished and she’d tucked him in bed, Carrie held Max  tightly.  He could smell the salt on her cheeks and feel the wetness of her hair.  “My little man,” she said.  “You would never leave me, would you?”

Max smiled.  Of course not!  Why would his mother even ask that?  They were like the mother and the baby bunny in the book, together always.  What a silly-billy!

Nancy Gerber’s writing has appeared in Mom Egg Review, Adanna Literary Journal, hip Mama and on-line.  Her most recent book, Fire and Ice, a collection of poetry and prose, was recently named a Notable Book in Bowker’s Shelf Unbound Competition.

Lisa Amowitz is a graphic designer and the author of two novels for young adults, the award-winning Breaking Glass and Vision. She has designed numerous book covers, including both of her own. http://lisaamowitz.com