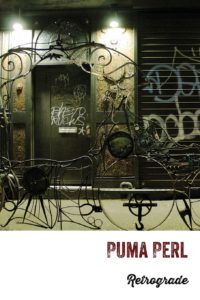 – RETROGRADE is not a quiet, comfy collection. Initially, I had the sofa with its kitsch crocheted throw as location in which to read Perl’s work. I wasn’t three poems in before I had to decamp to the kitchen, to its harder chairs and its wipe-clean table. Perl’s poems—perhaps because of their upbringing on the Lower East Side, in its apartments and on its sidewalks—demanded a starker setting. I put on coffee—strong coffee—and opened the door once again to Perl and her poetry.

When it comes to subject (and more on that next), Perl is a people’s poet. But when it comes to form—to the poem on the page and in the ear—Perl is also a poet’s poet. By that, I mean that that the evidence of her having paid her dues to the school of craft are all over this collection. She is confident in her use of white space, not only in terms of her ability to coral images into stanzas that allow the reader to handle the often tough subject matter, but also in her command of line breaks (these lines break; they do not turn or shuffle or end). In “Forever Retrograde” (123), a poem that melds the choices offered by a store elevator with, maybe, the choices offered through a hard year’s lessons learned, Perl, in a rare decision to lean on punctuation, end-stops seventeen consecutive lines, each one a command, an invitation to alight or a statement (“Synchronize your nightmares. /……../Second Floor. / Hats. / Dwarves. / Tobacco.//This is the last poem of the year.”) and then enjambs perhaps the poem’s pivotal stanza: “Suicide is the only way / to ensure a poem at the end.” It’s masterful, this ability to deliver lines that do double duty through line break decisions.

Perl reminds me in some ways of Ginsberg. Both weave the immediate into their work as documentary evidence. Both have a desire to somehow sing to an audience of their peers. Both have motifs…talisman symbols that speak to core experience. Ginsberg returns again and again to his “clock of meat”: Perl returns to her knives, honed and handed over in tiny, sharp cuts of poems (“Do not believe / my spoken word, / read my scarred / letters, they crawl / down my arms / like predators”—31) and to the vital squalor of LES apartments (“I don’t sleep on the floor any more. I’m too old to crash on moldy blankets, bodies of strangers on either side, sounds of wet fucking, smells of beer, blood and vomit”—101). Perl’s “immediate” embraces punk, both in approach and character. In “Nancy’s Legs,” she documents one part of one day but in doing so, she documents an age, one where Sid Vicious and Nancy, Barbie and Stevie Nicks, abuse and love collide. As Perl pulls herself away from the violence of “…two-year olds in fishnets and vinyl, stabbing each other with knives and needles” (101) she enters an anaphoric space: “I can’t kill myself, I can’t walk in stilettos, I can’t kill myself….I can’t kill myself, I can’t kill myself, I can’t kill myself” (101).

Perl is the only one who can answer her question about whether her poetry is worth her life’s high price. And it is a high price since this collection’s “meat” did not come cleanly packaged in a plastic tray and sealed with Saran™ wrap. The work is bloody in places and hard to handle. However, even with all its gore and raw tissue, Perl manages, by the close of the collection, to make a kind of sense of all this chaos.

If one of the roles of young poets is to document an age, then I suggest that one of ours as older poets is to reflect upon it. In RETROGRADE, Perl does both. And perhaps it is the juxtaposition of a life both survived and considered that gives this collection its edge. It’s a sharp edge: serrated and a little dangerous.

B.A. Goodjohn’s first novel STICKLEBACKS AND SNOW GLOBES (Permanent Press: NY) came out in 2007. Her second novel, THE BEGINNING THINGS (Underground Voices: CA), is due out in November 2015. Her poetry collection, BONE SONG  (Briery Creek Press: VA) was the winner of the 2014 Liam Rector Prize in Poetry and is due for publication in April 2015.www.bagoodjohn.com.