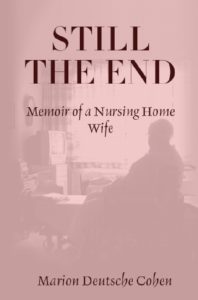 – “Yeah,” [the nurse]smiled back. “He’s got nine lives, like a cat…”…After she left, I asked him, “Do you want to KEEP ON living nine lives?” Very clearly, smilingly, and maddeningly, he mouthed, “ten, eleven…” Shit, I thought.

– STILL THE END is a hard book. It requires a reader willing to walk beyond a nursing home’s tastefully furnished reception to the often aseptic bedrooms beyond where families sit and wait—sometimes for years. It requires a reader ready for an account of love worn thin by constant need, a reader open to a writer who has no use for a feminine tradition of silent and selfless care-giving.
Cohen is convinced Jeff, MS-sufferer and new resident of Inglis House, is descending into dementia, a descent that slides him from “Husband” to “Oppressor.” After years of nursing him, she is no longer prepared to be taken for granted. She cuts down contact, telling him she can visit “only once a week,” that she feels like “disowning” him, and that she’s the only member of the Cohen family “not being taken care of”.
Her management of relationships is brisk. And it may be that this dispassionate approach is what’s been needed to keep this often single-parented family on the right tracks. Yet still there are train wrecks: her youngest struggles with his own feelings of relief and guilt about his institutionalized father; her oldest descends into mental illness, and her daughter shows a certain desperation when it comes to her father: understandably, she is loath to let him go. Cohen takes refuge in the humor of other “well-spouses” which often centers on prayers for a speedy end to suffering—mainly their own—and a fantasy of life “after caring.”
It is indisputable that the world is too full of women who feel obliged to take on the role of carer. “Boomers” are buckling under the long-toted weight of obligation to children, to husbands, to parents, to professional lives…and to themselves. STILL THE END is likely to strike a chord with those who, like Cohen, have found this burden too heavy.
It is clear that Cohen’s plate is full. I have had partners with head colds who have made the “in sickness and in health” vow a frustrating one to honor (the same vows that Cohen brands as “designed…to keep well spouses and other oppressed people in line” (100)). And I think we have all been in situations where everyone seems focused on the “body in the bed” and has no regard for the carer struggling to cope, whether with endless tissues and Nyquil™ or with the far more demoralizing and endless horror of night duty, bedpans, and inadequate insurance policies. Cohen’s frustrations convert to anger at this lack of recognition: somehow she has becomes invisible (or inconsequential) to the people around her. The “body in the bed” has become the oppressor she is continually “trying to escape” (104).
For me, the role of Jeff (or even MS) as oppressor is the problem of the memoir. It’s not that I don’t buy the idea. I have lost friends and lovers to the slow tick of chronic disease’s clock. I have watched character deteriorate under the heavy weight of sickness. But I don’t feel that STILL THE END adequately documents this oppression in broad enough strokes. As a reader of this memoir (and without perhaps the benefit of its prequel DIRTY DETAILS) I am left more with the impression of a dying man—angry and scared, tethered with a feeding tube and catheter, and stripped of all control—than of an abuser.
This is not to say that Jeff Cohen is not an abuser or that Marion Deutsche Cohen has not been abused. But the pages of this memoir did not hand me the evidence I need to find him guilty. And without that verdict, I struggled at times to understand the ferocity of her anger and resentment or to empathize fully with her situation. It may be that I have not suffered enough, or at close enough quarters to understand the world Cohen has fought to escape. But as a reader, I need to be shown that world in enough detail so that I can walk its streets and judge its unfairness for myself. If Cohen had managed to do that, perhaps I would have met with her at the memoir’s conclusion and commiserated.

B.A. Goodjohn’s first novel STICKLEBACKS AND SNOW GLOBES (Permanent Press: NY) came out in 2007. Her second novel, THE BEGINNING THINGS (Underground Voices: CA), is due out in November 2015. Her poetry collection, BONE SONG (Briery Creek Press: VA) was the winner of the 2014 Liam Rector Prize in Poetry and is due for publication in April 2015. www.bagoodjohn.com.