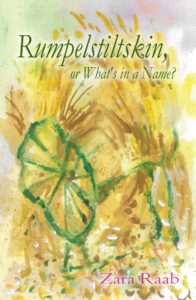 – Turning straw into gold is one impossible task. “Rumpelstiltskin, or What’s in a Name?” is a variation, dare I say a revision, of the rather-terrifying Grimms Fairytale. Zara Raab turns the strange story on its head and uses poetry devices to add humor and wit. From the first page the stage and tone are set:

The cast? There’s the Mother
whose daughter becomes the Queen,
the Dwarf who pulls the strings,
and the greedy one, the King.

It answers the reader’s questions in jest. The end rhyme of strings and king adds to the darkly humorous tale. The down-on-his-luck miller hands his daughter over to the greedy king to accomplish the incredible task of spinning straw in to gold. And here in this wisp of a riddle (how on earth is she to do that?), the characters develop. The miller is a down-home country boy with “just peas and biscuits warming on the fire.” The mother is conflicted over her growing child. Finally, the daughter is a budding young woman laden with the impossible task.

When I started reading “Rumpelstiltskin, or What’s in a Name?,“ I had just put my 8-month old daughter down for a nap. Parents read many fairytales and nursery rhymes to their children but this particular twist by Raab is no children’s story, pleasantly so. Complexity and undercurrents of political power structure, this tale is reads more Sophocles than Mother Goose. The fact that the story revolves around the Millers’ young daughter, made me think of my own daughter slumbering in her crib. What is her future? What trials she will face? Yes, there is a gender-structure that this book brings to light, one that is fighting against the dominance of the male presence, but the role of the parent and child is most intriguing.

This book speaks of what it is to be a parent, a true and realistic one. Moments are tinged with the highlights of childhood and the lows of raising an adolescent. Both father and mother are full of regret, temptation, remorse, love, responsibility and stupidity. All intertwine in their parenting decisions. The relationship between the Miller, Miller’s Wife and daughter is relatable and therefore remarkable as this tale is modernized for the 21st-century reader. To be human is to love and a parent-child relationship is something quite special. This relationship proves that humanity is ever-changing but also never-changing. This relatable mother-daughter relationship is highlighted in the Miller’s wife monologue:

How she judges me, my child –
well, child no longer.
She casts me a wild look,
fierce, full of hunger.

When reading this description of a young girl striving to womanhood, I too thought, “Will I ever feel this way about my daughter?” Will the wild pangs of adolescence come between my daughter and me? Surely as the waves that break on the beach this will come to pass, but the reckless and rushing waves will calm again. The changing from child to adult brings confusion and turmoil, but also perseverance and strength. This human perseverance is evident throughout this narrative poem, especially seen in the young daughter.

On the cusp on womanhood, she is innocent and fragile as well as strong and knowing. The act of Rumpelstiltskin abducting her baby makes the Miller’s daughter a dynamic character, moving from naiveté to one strong and filled with character. First she is reeling and in a state of shock after the abduction, unable to find her baby and herself in the mist of his absence. After the initial shock she does not lock herself up in her castle of grief. She instead removes her crown to participate in the village, contributing as an elder, an important community member. Her name is finally revealed when she becomes this new person, when she herself is fully realized.

We see this clearly in the conversation between the Miller and his wife after they send their daughter to the king:

Miller’s Wife: The infant found my milk run dry.
Now more troubles trail from there.
In this house of woe,
I gnaw my regrets

Hasn’t every mother felt this way? Expectations dashed, more troubles but with a pang of motherly guilt. But like this poem, character and self-realization prevail. And to answer the title question, “What’s in a Name?” The fact is, everything.

Rumpelstiltskin, or What’s in a Name?
A Narrative Poem by Zara Raab
Finishing Line Press 2014
26 pages