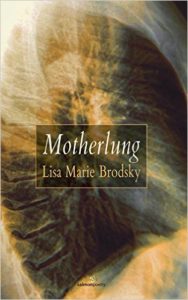 – The idea of what a mother should be is often romanticized in popular thought. Images of the perfect mother—ultra-organized, fierce protectors of their children (but never taking it so far as to appear unfeminine)—have been slathered over primetime television since its inception. However, Lisa Marie Brodsky shows us in Motherlung that mothers can also be fragile, scarred, and struggling. This dichotomy both strains and strengthens the mother/daughter relationship Brodsky skillfully renders in her poems, ultimately leading the speaker out of grief and into her adult life as a stepmother.

The tone of conflict is set through the titles of the book’s four sections: Mothership, Warship, Griefship, and Stepship. The speaker’s mother has endured divorce, rape, and now faces a terminal lung cancer diagnosis. Each of these instances affects the daughter as much as it does the mother, and their relationship becomes a pair of magnets set on end: attraction and repellent at once.

Brodsky illustrates this tricky relationship that develops between the speaker and her mother after the mother’s rape in “The Mother Inside the Daughter”:

As years passed
and her senses returned
I helped her stand up, learned to walk,
say the word “trust” again.
I raised her as she raised me.
I lived her fear as she lived
her own, her trepidations,
her protectiveness.

Some would go so far as to say
that, in my twenties,
they couldn’t tell the daughter
from the mother. One had swallowed
the other.

And yet, despite their fraught relationship, the speaker and her mother have genuine love for one another. They support each other, teach each other, and learn from one another through the mother’s illness and eventual death. The mother’s love, while humanly flawed, comes from a place of genuine caring, as is evidenced in “Pacifier”:

If we had time now to talk,
she’d list the food I need
to fill my empty fridge.

You need to clean once in a while, too.

Don’t use me as an excuse to slip away.

As Brodsky shows us here, even in death, a mother wants only what is best for her daughter. At first, it appears the speaker, who yearns to be a mother herself, only acknowledges this relationship in the biological sense. Eventually, however, she finds herself in a new marriage with three young stepchildren—a situation that, while not the ideal she has been dreaming about, teaches her more about mothering than she could have imagined. Brodsky shares these realizations in “What the Stepmother Gives”:

Stepmothers pass down
the ability to bend,
adjust, adapt.
She stretches a child’s heart
to include one who might not
have birthed her
or handed down a beauty mark
on the tiny bottom;

she is the last piece
in a disjointed jigsaw puzzle.

As Brodsky beautifully demonstrates, the concept of motherhood is actually fluid; as the title of the book implies, a mother is someone who breathes life into her child—biological or not—and sustains her. While it may also become easy to grow dependent on that sustenance, a mother continues to give it until the child grows into an independent force, a mother in her own right.

Issa M. Lewis holds an MFA in poetry from New England College. She was the recipient of the 2013 Lucille Clifton Poetry Prize from Backbone Press, and her poems have appeared in a variety of journals and anthologies. She also serves as an assistant editor for Trio House Press.