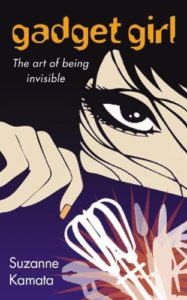 – Even before this young adult book was published as a novel, it won a merit award as a novella from the annual SCBWI’s Magazine Award competition. After publication, it garnered a long list of honors and recognition, most notably Bank Street College’s Best Children’s Book of the Year and a Skipping Stones Honor Award.

Kamata, a versatile author who has published other award-winning books in other genres (including The Beautiful One Has Come, stories, and Losing Kei, a novel), often tackles those issues that many writers avoid: physical disabilities, racism, cultural identity. In Gadget Girl, all of Kamata’s passions come together to give readers a shining example of what literature can do—give us an empathic glimpse into the world of the foreign, the ostracized, the other.

I have heard the complaint from disabled authors that there are almost no main characters in literature that are disabled. They tend to be the obligatory side character thrown in for dramatic purpose and PC marketability. Kamata’s main character, 15-year-old American Aiko Cassidy, has a lot to carry around. She has cerebral palsy, she was born out of wedlock and disowned by her father’s family, and she is bicultural. She is used as a subject for her mother’s sculptural art and bullied at school.

Half-Japanese, Aiko dreams of being an indigo farmer like her estranged father, and the powerful opening sets the tone for the book:

My father has blue hands. Or at least that’s what Mom tells me—one of the few facts I’ve been able to wring out of her. See, he’s the eldest son of one of the last indigo producers in this village on the Japanese island of Shikoku. . . .

“You were named after that plant,” Mom told me. “Ai means indigo. Ko means child.”

Indigo is my destiny.

But is it? Kamata also provides a wonderful model for young women. Aiko is real. She makes mistakes, she needs to mature, but she does so gracefully and with inner strength. It’s her inner and physical pilgrimage to find the manga artist in her, and the forgiveness she needs to enact in order to move forward, that is both tender and absorbing.

Set in Michigan and Paris, Kamata introduces us to Parisian culture as well as Japanese, and a bit of Latino culture in the form of a Latino stepfather, creating a kaleidoscope of worldviews. With the expansion of our borders through the Internet and global connections, Gadget Girl is an important addition to the YA list for both young men and women, and adults will also enjoy the characters and settings and can feel confident gifting this book to their children. It’s also a good addition to a school curriculum on interculturalism and disability issues.

Aiko is a contemporary coming-of-age hero to remember, and Kamata is a writer to be commended.

Gadget Girl: The Art of Being Invisible
By Suzanne Kamata
GemmaMedia, 2013

Tara L. Masih has won multiple book awards in her role as editor of The Rose Metal Press Field Guide to Writing Flash Fiction and The Chalk Circle: Intercultural Prizewinning Essays. She is also author of Where the Dog Star Never Glows: Stories, and has published fiction, poetry, and essays in numerous anthologies and literary magazines. Several limited edition illustrated chapbooks featuring her flash fiction have been published by The Feral Press. Awards finclude first place in The Ledge Magazine’s fiction contest, finalist standing for the Reynolds Price Fiction Prize, and Pushcart Prize, Best New American Voices, and Best of the Web nominations. www.taramasih.com.