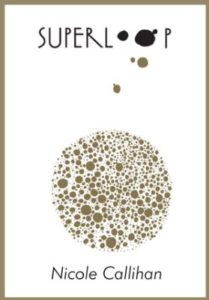 – I expected to graze on Nicole Callihan’s Superloop (Sock Monkey Press, 2014), but I ended up devouring it —or, to make use of the titular metaphor, I went to Callihan’s classy midway and didn’t want to leave. This collection has a quirky gravitas that commands attention, and Callihan’s poems are just different enough, one to another—stylistically and thematically—to keep the reader wondering what kind of ride comes next. Sometimes, the poems are a giddy, rushing experience; sometimes, they carry the reader away gently, such that she might not realize it until the bottom drops out of her stomach. Regardless, Callihan’s control inspires confidence. Her approach is decidedly modern and meaning can be elusive, but her poetic experiments have a deep, grounding resonance. They are steady on their own track even if they occasionally exceed the capacity of the reader’s senses.

Superloop is dedicated to Callihan’s mother (“of course,” she says), and a number of the poems touch on mother-daughter relationships. More generally, they are about love, loneliness, fear of disconnection, aging, illness and death—aspects of any real relationship. None of this material is particularly fresh per se (what is?!), but Callihan shapes it in truly surprising ways, and the affect is often breathtaking and profound. More than once, my marginal notes attest, “That’s exactly how it is, isn’t it.” “Guinea-Pigged at a Quarter ‘til Four,” for instance, starts with observations from the operating table and eventually disintegrates into scattered bits of thoughts, disjointed references to her body—a fine verbal picture of what’s left on the edge of anesthesia.

There is a good deal of sadness in these poems, but the palpable humanity at the core is much better than sad. There’s also a good deal of joy, and humor, too, which Callihan manages quite cleverly. It takes a certain skill to work a humorous conceit through a poem without it beginning to feel forced or hokey, and Callihan has that skill. Her coy meta-poetry about writing poetry is as much real poetry as anything else in the volume, sharp and thoughtful and endearing.

I found the book increasingly charming as I read along (ever more slowly, and with greater admiration). Airy poems like “The Breaking,” “Crushed” and “Near Dusk:” lilt along like songs, while “Thanksgiving,” packed full of all kinds of down-home ugliness, works because it sings like an entirely different kind of a song–a country song in which two women, strangers on a bus, compare disappointing lives as they work through their HoHo’s and Marlboros. There are other moments in which Callihan’s poems sing like lyrics from the golden age of antiquity, rendered gracefully in translation. In its dignified simplicity, “Ordinary” sounds like something taken from Propertius or Horace: “I have given up on imagining I am a saint / or a philosopher or even much of a poet. / I regret I cannot raise you from the dead.” “Lesson Three” has all the elegance of Sappho (and fortunately, I have room to quote it in full):

The name of this technique,
he said,
is afternoon.

Then pressed his mouth
to her collarbone,

pressed his mouth
‘til evening
broke the window.

“Conviction,” a tense quasi-sonnet, has its own, very different ring of rich tradition emptied out of bombast. “Or Is It Octopi?” is a playful picture of young, wild love making itself a world south of the Mexican border; it sounds like something Federico Garcia Lorca might have written if he had ever been in a genuinely good mood.

The physical book, like the poems therein, is very attractive in its spare way–a clean, bright white hardback spattered with black and gold, decorated inside with the silhouettes of trees changing by season. The typeface, thin and fine, puts one in mind of those tenuous threads that keep everything from flying off the spinning world, the little tokens that prove humanity and draw connections with their unsuspected gravity. Callihan gestures at these in one of my favorite poems, “An Invitation:”

You have yet to check
my corners for cobwebs,
nor have you sat uncomfortably erect
in my metal folding chair.
You have not glanced
my practiced desk,
my too small room,
my hangers, white and plastic
as old timey baby dolls.

I have saved
the sage to burn, dear,
the Cabernet to pop,
sip, make humans of us.

Callihan’s poems, however brief, have a lot of room inside; they are a place to come in and get lost in space–a thrill worth the ticket.