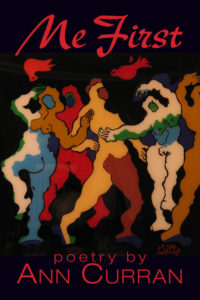 – When I opened Me First, a collection of poems by Ann Curran, I found two pages of “testimonials” from historically important artists, writers, industrialists, and even Jesus Christ, who has this to say: “Don’t blame me. I just gave her the talent. Never told her what to do with it. However, I’m glad I made the cut.” And this from James Joyce: “I think Me First could have been a little more obscure . . . . But sometimes it made me LOL.” The commentary left me laughing and also a little confused: what kind of joke was this? But as soon as I read the first poem, I realized these comments – deadpan, sarcastic, funny, ironic – exemplify the poet’s way of viewing the world. She often uses self-deprecation and humor to explore the deepest, darkest subjects, from a little girl’s terror at a grown man exposing himself on her way home from school (“Me and Diane Yeagley”) to the sexual abuse scandals in the Catholic Church (“Me and the Catholic Bishops”) to the death of 36-year-old Judith Resnik on the Challenger (“Me and Judith Resnik”). But Curran does not sacrifice her religious faith. She is a crusading poet with a piercing pen.

My favorite poems are those that grew out of interviews with the famous and infamous, writers, politicians, industrialists: Czeslaw Milosz, Seamus Heaney, Allen Ginsberg, Andy Warhol, Maxine Kumin, Paul Mellon, and an un-named axe murderer. Curran worked as a staff writer for the Pittsburgh Catholic and Pittsburgh Post-Gazette, and as an editor of Carnegie Mellon Magazine, and she brings a reporter’s grit and gimlet eye to her poetry. In “Me and Maxine Kumin,” the Pulitzer-prize winning Kumin laments: “But yes, the general public still sees/the poet as a ‘fop or buffoon,/absent-minded, head in the clouds.’’ The poem refers to Kumin’s passion for horses but seems to have been written before the riding accident that nearly killed her. When Curran asks Ruth Stone when poetry began for her, the answer is: “As her mother nursed her, she read Tennyson’s/’In Memoriam’ aloud. Ruth drank in meter and milk.” The acknowledgement that poetry is as essential and life-giving as a mother’s milk creates a link between Curran and the more well-known poets she interviews. In the bone-chilling “Me and the Ax-Killer,” Curran meets with a prisoner who blossomed in prison, writing books, graduating with an English degree magna cum laude. But when it comes to the murder of his fiancé:

Then he begins to destroy her again/
chopping with words, justifying the murder,/
explaining his anger with a reason….
this guy is so cool,/
like a giant icicle doomed/
to fall and cut through flesh.

Curran’s voice is open and accessible. In some of the poems the lines are complete. For instance, in “Me and Leonardo,” Curran writes, “We share the love of early and late light./He as a painter; me, a photographer.” In others lines are carefully broken. In “Me and a Hero”: “He helped evacuate the last/skeletal prisoners from Dachau.” Curran is acutely aware of rhythm, which always receives her careful attention.

Curran gives us her hometown of Pittsburgh in all its grime and glory, its industrial past and the wealth it spawned. She is an able chronicler of both the structures of the city and the inner workings of the human heart.

Nancy Gerber is an advanced clinical candidate at the Academy of Clinical and Applied Psychoanalysis in Livingston, New Jersey. Her third book, Fire and Ice, was just released from Arseya.