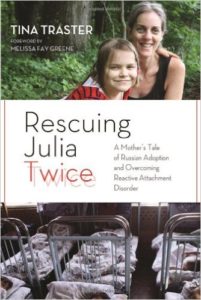 – As an infant my oldest daughter loved being cuddled and entertained by aunts and grandparents, but she cried for days after their visits. She threw her first tantrum at 18 months and continued, almost daily, until she was in fourth grade, when I, at my wit’s end, sought professional help.

My daughter had an auditory processing disorder and dyslexia. Knowing what was really going on in her brain helped me to stop being angry at her, to stop thinking I was a bad mother, and most importantly, to heal our relationship. My daughter is 26 now, thriving as an accountant, aware of her struggles, and compassionate because of them.

If I’d come across Tina Traster’s memoir, Rescuing Julia Twice, twenty years ago, I would’ve devoured it in one sitting, my heart pounding, my breath held, afraid of being caught—reacting the way Traster did when reading about Reactive Attachment Disorder (RAD) online and saw her adopted daughter’s personality traits precisely captured: indiscriminate attention seeking from adults, inability to ask for or receive comfort, no close friends, hypervigilant, hyperactive, constant chattering, doesn’t understand cause and effect.

Even though my daughter’s problems were different, my self-doubt and fear were similar: “I thought I was the only one in the word who experienced difficulty with her, that I’d made a mistake, that motherhood and I weren’t meant to be.” How reassuring it would’ve been to read an honest account of a questioning mother and beyond-difficult child, rather than slick articles and quick advice in popular parenting magazines that didn’t work for my daughter or me.

Reading Traster’s memoir now, draining days of parenting long past, I am drawn in by the evocative language and the threads woven into the adoption story—Traster’s abortion as a teen, her parents’ marriage, her first marriage and the rift with her mother that accompanied her divorce, her second marriage to the optimistic Ricky, the challenges of self-employment, restoring a house, and the larger issues of international adoption—that add complexity and texture.

A journalist by profession, Traster’s first book demonstrates her skill in providing well-portioned background and description. The early moments of the adoption process are brought vividly to life. Of their first night in Siberia where she and Ricky travelled in January to meet infant Julia at an orphanage, she writes: “Whatever sunlight we saw that day had come and gone quickly. The night air is sharp as a cat’s claws. It tears the skin.” Her reaction to borrowing a crib from a friend when the adoption proceeds faster than expected: “I stop short at saying what I’m really thinking, which is that I have a used crib for a baby that is not really mine. A used crib and a used baby.”
Before she adopted Julia, Traster understood the act involved wishful thinking: “Are we to believe we can reverse these early damages? Yes, yes, we tell ourselves, yes, absolutely, we have enough love to compensate for what they’ve lost. We will undo the damage, wipe their slates clean, as though they are Etch A Sketch pads. We will love and adore them and make them feel as though they were born the moment we took them away from the ammonia and tiny cots where they are virtually imprisoned with swaddling blankets and left to suck on cold-tea concoctions.”

She thought love should be enough, and through several chapters, Traster delves into the difficulties of daily life with Julia, balancing summary narration with specifics. Through it all, Traster blamed herself: “I told myself the problem is that she’s not really mine and I had overestimated my ability to love and bond with a child that’s not my flesh. Shame grew everyday.” And then, at a school concert (an event that never went well) when Julia is four, something shifts: “At this moment, I know in my heart she’s not all right and I must do something about it. This is my child. She’s calling out for help. I must come to her aid. Once and for all.”

The book speeds forward from Traster’s decision to “do everything I can to make love happen between Julia and me,” to her discovery of RAD and troubled Russian adoptions, to appropriate parenting techniques. As a result, Julia begins to thrive and love does happen.

After the narrative concludes, Traster includes advice and a list of resources on RAD and adoption as she does everything she can to help other parents and children make love happen, too.

Cathy Warner is the author of Burnt Offerings (eLectio 2014). She earned an MFA from Seattle Pacific University and serves as literary editor for Image journal’s online “Good Letters.” Cathy blogs, edits, and leads writing workshops in West Puget Sound. Her website is www.cathywarner.com.