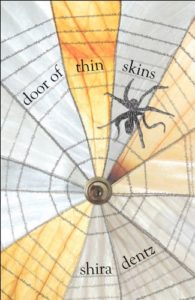 – At seventeen, my daughter and her friends call older men, by which they mean those past college age, who are interested in them, pedophiles. The middle-aged male narrative of nubile young thing with interest in older men certainly doesn’t seem to have anything to say to these young women. In door of thin skins, Shira Dentz uses a combination of prose, erasure and visual poetry to tell the story of psychologist in his sixties who sexually abuses his college-aged client. The variety of techniques Dentz employs deepen the narrative and convey the felt experience of the betrayal of trust and the subsequent seeking of redress. She directly addresses the ways in which the narrator’s experience of crossed boundaries that occurred in the context of therapy changes one of the sense making institutions of modern life turn into a nonsense creation machine.

The book begins with a poem “Dr. Abe’s Psychotherapy,” and then continues with three untitled numbered sections (2, 3, 4) that immediately prepare the reader for the ways in which “Dr. Abe” encroaches on the boundaries of the therapeutic relationship.

A whale of a man greets me at the door of his penthouse apartment. Very
friendly. Not the medicine man in his opaque box. The room is fashioned
according to Freud, lover of the primitive: an olive paisley daybed, art in a
precise geometry along the walls like cut edges around a house . . .

A woman’s torso with flowing breasts, blue and gold, coat of thin skins. A gift,
he says, from the painter, a former patient.

. . .
At 21, I want to look androgynous, stuff my femaleness out of sight: for
my first visit to a male psychologist, wear a handmade maroon v-neck sweater
knitted by my best friend’s mother, and my own mother’s grey trousers and
blazer, several sizes too big. . . . Five years later I watch his lizard
tongue flicker at the curb of my mouth, into which it disappears. Tucked in so
wide a man was such a narrow tongue. He says you think I’m doing this for you,
but really I’m doing this for me. Ten years later he swears: You think this happened
with me, but really it was someone else, for god’s sake.

but really it was such a narrow tongue.”

In the course of this poem, Dr. Abe tells our narrator that one of his daughters was in college with her, and a number of excessively personal details of his life.

“Halfway into the grey matter. Our meat / the word crazy, the heart. Halfway
into
the heart.”

Dentz uses such varied techniques, even in the first poems of door of thin skins, in order to convey both the story of abuse and her perceptions of the narrative of this abuse both at the time and later in reflection. She even conveys parts of his version of the story, though she retains an authority in the poem that she was unable to do as a patient.

The staging of this work is critical. In the first poem, she immediately brings to the reader the awareness of the doctor’s inappropriate reference to his former patient’s artwork, while the painting itself is disturbing with its implication of relationship between that patient and the therapist. Later in the first section, primarily in a group of numbered sections she continues with the broken narrative of the therapy and abuse. Then about one-third of the way into the book, the narrator involves the legal system, and we learn of how challenging it is to have a successful prosecution of one of these cases, and the years of waiting for action and a decision.

In the later two-thirds of the book there are also a number of poems dealing with the narrator’s life, which contextualizes why she wanted to enter therapy in the first place, and why she would have been so vulnerable to this exploitative therapist.

In addition to the techniques previously mentioned, door of thin skins also contains documents, and a number of typographic ways of conveying meaning including visual poems like one that consists of rifts on “SENSE,” sections of other poems where the text is grayed out. These parts of the book feel essential, not like experiment for experiment’s sake.

Shira Dentz’ door of thin skins creates a world in which the only way to tell this story is through using a variety of techniques, so that the reader can confront the emotional truths of abuse. Although, the narrator receives minimal justice from the legal system, in this book she finds her own justice by telling about her story in detail, and about how the system failed to censure this man. She also reveals the impact it had on her life as a young woman, and for many years after these events.

For the reader, this book tells a compelling narrative, while opening up possibilities for a more flexible approach to the narrative poem.