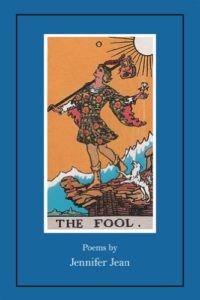 ….My first step on water was for balance–
my arms arced, clutching after the folds of those notes.
The second step, for fright, caught me fast–
divided between two surfaces. This seemed wrong so I tiptoed
following the paper’s flux for a few yards,
scooping it up when the wind was lazy.

Here we have the poet balancing on Pier 42 on the Pacific Ocean–about as far west on the continent as you could go without falling off–desperately trying to grasp an “incomprehensible/villanelle conception or a grocery list” let loose in the wind. Jennifer Jean’s fourth collection of poetry takes its name from the unnumbered card in the Tarot deck–The Fool–who is depicted standing at the brink of a cliff, either enamored by the journey or mastering the art of balance–or both. “She could take new forms (mother or lover or soldier?)./She told her brother. He laughed. You’re such a joker.” (“Hansel & Gretel”) The Fool, like its namesake the vagabond and beggar, takes us on a journey, across fractured landscapes and fractured heart-scapes, from a childhood with an absent and broken father to motherhood, from poverty to poetry. It is the record of the woman (mother, daughter, sister, wife) emerging as a poet: “…I am/ripe, understood…//I arrive.” (“Crave”)

She flies like a Fool—in a way
she never would were it not for fear.

…if I stay here I stay
exactly the same: moved

The landscape, though, expands emotionally throughout the book, beyond our continent, into the vastness of language:

then, in Siberia, pining for the Father, heartbroken herders
remembered the Mother by folding their throats into two tones

Along the way, this landscape does crack, leaving the poet to look over the edge and balance. We are assaulted by actual earthquakes in the first two poems; throughout the book, broken images—external and internal—arise, like seismic plates. “The only thing interesting about rock is how to/destroy it—“ Jean writes in “Some Thoughts on Rocks,” and she presents these broken images not only to create this precipice, but to allow for an internal movement, a morphing. In “In the War,” she writes:

…They wrenched me
down through the floor and the fault lines,

then up into a disfigured barroom
serving you the thick liquids of our Azor ancestry.

In “Garden Apartments in Canoga Park, Calif.” Jean recollects an impoverished childhood: “…we tried to wait/in laundry rooms, cracked courts….” This poverty is mirrored on the other side of the continent, when after leaving her native California, she arrives in “Little’s Lane in Peabody, Mass.”

It’s this uneasy balance caused by the breaking of things that impels the Fool to travel, that creates the wife and mother and poet.

Why risk living
so near peril? What if
he won’t love me later?

The challenge is loving despite the broken-ness, despite the abandonment, despite of (or in spite of) the fear: “I could not stand at the altar/and—like a Tarot “Fool”—amble off an edge into”. For me, as a wife, mother, and poet, I found the genius of this book to be in claiming that cliff the Fool walks toward; the balance and grace that is so necessary, so illusive and sometimes elusive! Jean writes in “Her Children”

“Skylla, as if she were one of those prolific women
writers without children
(Dickenson, Moore, Bishop, et al.)

We only adored like daughters do
when biting on a potent teat.

The friction of these sensibilities, so like the quaking of the California soil where Jean grew up, comes to life in the language of these poems, where the words smash up against each other, brilliantly. The Fool is a muscular book, and a feminine one, giving voice to the daughter, the wife, mother, and poet, unafraid to “thunder.”

Jennifer Martelli was born and raised in Massachusetts, and graduated The Warren Wilson M.F.A. Program for Writers (M.F.A.). She’s taught high school English as well as women’s literature at Emerson College in Boston. Her work has appeared, or will appear, in The Denver Quarterly, Folio, Calliope, Kalliope, The Mississippi Review, The Bellingham Review, and other publications. She was a finalist for the Sue Elkind Poetry Prize and a recipient of the Massachusetts Cultural Council Grant in Poetry. Her chapbook, “Apostrophe,” was published in 2011 by BigTable Publishing Company. Right now, she is at home with her two kids, involved in the poetry scene in Salem, Massachusetts, and teaching occasional classes at the Peabody Library.