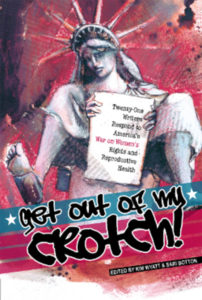 – Published on the 40th anniversary of Roe v Wade, the cover of Get Out of My Crotch is the Statue of Liberty with her legs spread and her bare feet in the stirrups of a gynecological exam table. Her expression is demure, a bit sad, and she’s holding a sheet of paper in front of her crotch saying that inside are 21 essays on the War on Women’s Rights and Reproductive Health.

The book presents a range of viewpoints, but the writers are all in agreement that their reproductive rights are being challenged in the U.S.’s current political arena. In 2011 alone, more than 1,100 reproductive health and rights-related provisions were introduced and 135 provisions were adopted. “I assumed that since nobody was organizing to repeal a woman’s right to vote, eventually the topic of abortion would be removed from the political arena and fall squarely within the realm of health care. That we as a society would someday look back on the dark days of illegal, back-alley abortions as shameful, much like we do with slavery.” ~ Kari O’Driscoll in “A Mile in Their Shoes”

The essays include history, politics and personal stories from grandmas, wives and single women from diverse socioeconomic and religious backgrounds. Some essays are analytical and others reveal painful experiences and the challenges faced by the writers and their doctors. The book is important reading for anyone who cares about women and their reproductive health.