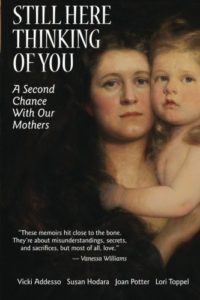 – “Why does it look like that?” my seven year old Chloe asked a few weeks ago, pointing to my bare breast as I tried to squeeze into an outworn swimsuit.  I liked her question. “It’s a poet’s question!” I thought, with outsized pride.  But what I explained then is how, as an infant, she used to grab and kneed the bulbous flesh as she put the milky tip into her mouth. I told her that I was giving her love when I was giving her milk. That my substance, which is love, is expressed through my form. And, now that she’s older, it’s my brain thinking and my mouth talking that feed her. She got it. She smiled and began to poke at my areola. I knew I didn’t, yet, need to go into other uses or meanings or history of the breast. I didn’t need to say I wasn’t a fan of nursing, really, and that I get why women don’t go there. Those chats are for later later later.

What I loved about the memoir anthology Still Here Thinking of You: a Second Chance with Our Mothers is this same sort of unity of form and excellent substance, which made the themes of the book—regret, gratitude, discovery, and resurrection—rise to the surface like rich cream.

A few years ago, four writers—Vicki Addesso, Susan Hodara, Joan Potter, and Lori Toppel—formed a memoir writing group solely dedicated to writing essays about their mothers. This vivid compilation is the fruit of their efforts.  The title of the anthology comes from a Carol King song of the same name—and King is a good choice considering she sang, with her daughter Louise Goffin, the theme song for Gilmore Girls, a popular, early-aughts show about mother/daughter relationships.

The book opens and closes with brief reflections explaining how and why each woman began this project. The subtitle “a second chance,” meaning a chance to relate beyond the bounds of time and death, comes clearest in these sections:  “As I change so does my perception of my mother,” says Vicki, “Our relationship is ongoing; it is a wellspring.”

What’s also apparent from these reflective bookends is that the existence of their writing group—that memory gathering, refining, and sharing—was just as important as the memories detailed in each essay.  In her concluding reflection Lori wonders, “Would I have eventually written about my mother without them?”

With her keen ability to accurately parse, Lori also notes that, “Our writing styles were diverse:  Joan was concise, often wry; Susan had an unforgiving eye for detail; Vicki’s voice was lyrical yet unabashed.” This differentiation was vital in making the book simultaneously a portrait each particular mother and a catalyst for readers to (re)consider their own mothers.

We first read Joan’s essays about her mother Shirley who struggled in Tupper Lake, New York, living “as one of the few Jewish families in a largely French-Canadian village.” Then we meet Vicki’s no-nonsense, Catholic mother Pat who dabbled in painting. Lori’s mother Estella was the most cosmopolitan mother in that she came to America via England, and then Puerto Rico, before settling in New York to confront a bitter divorce. Susan’s mother Selma, a sometime-singer, is the only one of the mothers still living—which initially posed a complication for Susan, who concluded, “It is a great relief to me to have had the chance to tell her all the ways I’ve been thinking about her, and to have done so in the best way that I could.”

I have to say it straight—from the get-go, I loved this book! These women wrote gracefully, gratefully, and lucidly. But, I noticed that their mothers—as characters—were elusive, unyielding. I wondered if it was a generational thing. Or, if elusiveness is an essential aspect of mother/daughter relationships:  that it’s impossible to absolutely understand one’s mother. Like holding a hand-mirror against your nose. The image (or in this case, the person) is too close to see, entirely.

The book made me re-think how and what I think about my own mother (Hi Mom! I know you’re reading this!), and about what kind of relationship I’m forging with Chloe.  I can see my girl chewing on all the words I feed her now, see her trying to understand me. This book made me know I must consciously counter my own urge towards elusiveness. Because, as Carol King sings in Still Here Thinking of You, “Someway I’d like to get through/ Someday I’d like to get to/ The road that’s straight beyond the bend…”

Jennifer Jean is the author two poetry books:  The Archivist and In the War.  Her poems, book reviews, and essays have been published by, or are forthcoming in: Drunken Boat, Caketrain, Denver Quarterly, Poetica, Tidal Basin Review and The Rumpus.She’s a blogger for Amirah (www.amirahboston.org)—a site that advocates for sex-trafficking survivors, and she teaches at Salem State University. For more on Jennifer visit: www.fishwifetales.com