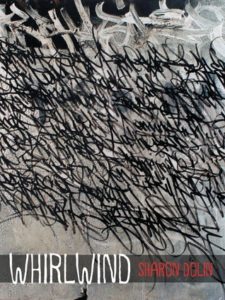 – As anyone who has experienced or witnessed mourning knows, the process of grieving is not linear, but indeed a whirlwind of anger, blindness, and, in rarer moments, stillness and clarity with a weight as palpable as the eye of a hurricane. Thus is the experience of reading Sharon Dolin’s Whirlwind, an account of life after a divorce in the shadow of infidelity. Dolin’s poems force the reader to pass through the flurry of emotions, through the bands of this hurricane of being wronged, abandoned, and transformed into someone stronger. In “To the Furies Who Visited Me in the Basement of Duane Reade” rage and ravage everything in their path. Others howl with sounds and the mutability of words, refusing to reveal intentions, such as “Not a Vase” and “Desire and the Lack.” Finally, there are poems that bring us back to the center calm, increasing as the storm dissipates until the speaker hears and feels herself again: “For the wind, the wind, which causes a stirring within the stillness and a stillness within the stirring.” Dolin achieves such a diverse shift in tone through alterations in syntax and form.

As I read through the first section, I was taken by the unabashed confessional voice. Dolin takes up the Confessional tradition of Lowell, Plath, and Olds by creating a narrator unafraid to use the ‘I’ or to tell the narrative and all its emotions in syntax so simple and language so unadorned it is like listening to a friend over a cup of coffee. The opening poem, “Ode to Nitrous Oxide” connects a memory of laughing gas at the dentist’s office to “Here I am now,/forty yeas later, asking for it in another East Side building where my name/ is announced. Asking to be put out of my pain….” I, the listener/reader, sit across the table, nod and know that desire for numbness. Through this section, called “Smudging,” Dolin refuses to spare us any details, or, as she says, “no way to pretty this up,” as she purges the raw facts of infidelity and divorce. Yet Dolin’s rawness should not be confused for lack of control. In “Scenes from an Ideal Marriage,” Dolin breaks the straight narrative with a four-section poem whose obtuseness reveals a speaker suddenly emotionally distant when having to reflect on the lack of the ideal in her marriage: “The bedsheets are creased/ paper with very little writing/ on them.”

In the second section, “Playing My Part,” Dolin’s speaker, who has “smudged” her emotional world, plays through the roles of healing to confront the reality of her divorce. Now, she returns to her part as poet, using form, metaphor, and the duplicity of words to re(dis)cover herself through the winds and rains of the hurricane. In “What I Knew,” the speaker dodges the known and unknown, recreating the frustration of a marriage void of communication: “Or couldn’t have known I knew and continued…. He didn’t want part of himself to know.” This exemplifies Dolin’s control over her word choices and immediately shifts the tone for this section. Each poem takes on a different stance that moves the speaker’s gaze from outside to inside, eventually implicating the self in the failure of her marriage. This culminates in a new confession in “Playing My Part,” about the connection between her relationship with her “zombie-mom” to that with her husband, “This was what love could feel like –/ somnolent, absent. Why be paranoid…” she reasons. Thus, the whirlwind unwinds.

The final section reveals a new sense of clarity of the self. In “Forward Sestina (Dylanesque)” Dolin distills the long ranting lines of the openings poems into a sestina of unrequited desire:

This return to desire is eventually released in the songs of the final poems. Literally. With “cicadas” and an “oboe” and a “contradanse.” With a new “beaux.” With the “hap” of “happiness” in the section’s title poem “If Happiness is Luck,” found in the strength of facing the storm of infidelity, divorce, menopause, and death, the speaker of this book sings.

Dolin listens to her poems, honoring their calls for the formal or the experimental to faithfully recreate this emotional journey. Thus, as the speaker moves closer back to love, the poet seems to move closer back to the lyrical in poetry: “all these movements towards expressions of the self.”
Whirlwind by Sharon Dolin
University of Pittsburgh Press, 2012
78 pages
Paperback: $15.95

Lisa Cheby is a Los Angeles poet who works as a high school librarian. She received an MFA from Antioch University, works with the Board of Directors of the Valley Contemporary Poets, and is the editor of Annotation Nation Poetry. Her publications and readings may be found on her website: http://lisacheby.wordpress.com/