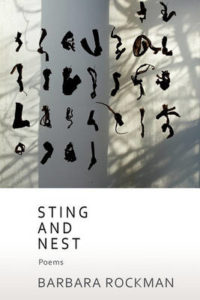 – I have read a lot of bad poetry. Between having moderated a poem-sharing site and now judging a monthly online contest, I’ve read more than my share. I know bad poetry. And I dread it. And let’s face it: these days there’s less guarantee than ever that because something has made it into book form it must be at least passably good. So when I’m given a book to review, it’s not received without at least a modicum of trepidation. The artful cover of Barbara Rockman’s debut, Sting and Nest, put that fear on hold. Opening the book to read random poems erased it completely. Upon reading and re-reading the book entire, my only uneasiness became whether I was up to handling critically a book of poems this good.

Ms. Rockman’s poems bear the mark of craft. Many poems, like “June,” sustain repeated readings aloud, the play of sounds as rich as the meanings they carry. They explore archetypal relationships: mother/daughter, father/daughter, wife/husband, self /world, and the work of the poet/the work the world asks of us. The book is divided into four numbered sections, which seem to be organized chronologically, not so much in the order as written, but in terms of moving from poems dealing with youth to poems dealing with later life, her own, her daughters’, and her parents’. They evidence a happy life: parents who love each other and their daughter, a marriage that survives, children that do not die, despite the dangers out there. But they are not oblivious to those dangers, nor to the suffering inherent in even the happiest of lives, much of it caused by the mere possibility of loss.

Especially regarding the relationship with her daughters, the book feels like a teeter-totter between hope (“Prayer for My Daughters”) and despair (“Motherhood”), often punctuated by the miracle of balance between the two, an equanimity that feels like clear-eyed celebration (“Despite Dark Matter, the Girl Goes Forth”). In “Daughters,” one of the darker daughter poems, which begins, “When I became someone to slip past,” we hear, “every word root nurture/ future umbilicus hip/ became loneliness/ where I had been target they/ became arrows.” But because, until the last line, the poem is written in the past tense, the hurt seems something being let go. In the poetic preface, “Thoughts on Making a Book,” we discover that the poet was pressed by her dying father into promising to finish his novel. She does not finish it, though for a long time she intends to, and so part of the book’s tension lies in that ultimately rejected burden (what a thing to ask of a daughter, after all). Near the end, in “Bedtime Familiar,” she manages to convey a mutual forgiveness. “Tracking April from the Treadmill,” in addition to providing beautiful natural images seen through her window, acknowledges the middle-aged joy of reclaiming a body gone soft with winter’s stillness, and ends, “May and it’s evident/ my mortal muscle/ cinched and eager is not/ the only body I call mine.” In a brief strophe she declares the eternal and edifying truth that health and happiness lie in transcending the self and constructing a larger identity in the natural world.

Some poems’ meanings are less easy to distill. “There is the thing I want to touch,” and “weeping is to pearl/ as flight to calculus” push the envelope in terms of resisting interpretation, though both poems manage to hint at plenty. And what does it mean that the titles of both these poems, and just a few others, “In each paper cell,” from which the title comes,“I believed,” and “work,” are not in all caps, as are all the others? It’s almost as if they are thereby set apart, to be used as a lens through which to view the rest of the poems. The book is otherwise too carefully designed and executed for me to believe it’s a mistake. This detail and the enigmatic and sophisticated artwork on the cover cast a spell that helps the reader recognize what some might dismiss as merely accessible lyrics of domestic life as what they are in fact, artworks that delve deeply into all human experience by getting to know, without flinching, the truth of just one. It brings to mind the the Zen masters’ metaphor of grasping a cloak by getting hold of one thread.

In the last poem, “Walking Beneath,” surveying a pile of tied-up branches in bud awaiting collection after a storm in the colored light of sunset, she observes, “no one can steal/ the soul’s bud and flourish// even while announcing the dead,” and ends, “find bounty the day plead/ unfold that which is folded/ break something/ once considered sacred.” Seems like good advice, in a world filled with such dark matter. Ms. Rockman is a poet who knows how to listen to the day. I hope that in examining the content of some of these poems I haven’t spoiled the experience of reading them for those who read to know “what happens.” Even those readers must read the poems to have the true experience of them, the aesthetic experience of the music they so richly manifest. And the emotion with which they vibrate, the subtle complex weave, can be conveyed only by the words, so clearly carefully chosen, of the poems themselves. This is a collection I know I will return to over the years, only now approaching the rapids on my own wild ride through motherhood, for solace. It is, as one of its blurbs insists, a blessing of a book, and testament to what can happen when a poet chooses to wait to release her work into the world.