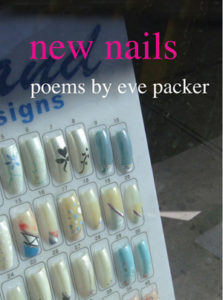 In the title poem, “New Nails,” another client is “beyond / Beyonce pretty” and “so crazy-glue / bubble- wrapped in love a spell / is cast.” But this other client turns out to be an Iraq War veteran treating “her hunk” to his own pedicure. In poems like these throughout the book, the word “nails” takes on multiple meanings, from the playful and campy “cranberry fuchsia glitter” that we paint onto the tips of fingers, to the ominous connotations of distress and violence: “do not tell me not to bite my nails” (and I kept thinking of nails in a coffin). The word “pedicure” becomes not just a referent for a fashionable indulgence, but a place where human connection creates the possibility of emotional and social revelation or “cure”: “what is love / kim I say / she’s re-touching / my acrylic tips w/lavender […] she says, love is everything, / everything love.”

Packer participates in documentary poetics by presenting her speaker not only as diarist and activist, but as journalist and fieldworker. If David Lehman wrote daily poems on his life in NYC, Packer echoes this practice, but uses fieldwork to overturn established orders and ways of seeing. Many of the poems in New Nails depict the process of their own formation. In “Xpress DVD Video Palace / Sex Sex Sex,” for example, the speaker uses the titles she found in the store: “Buns & Roses / sale $5.95 […] Employ My Pussy / Ass-A-Thon.” But the poem really depicts the exchange between the speaker and the store clerk who tried to prevent her from recording the titles: “You can’t write it down / he says / the doors open i say / its legal.” In “7 sopranos sonnets,” the speaker confesses her desire to buy “the saturated monochrome oil over precise ink study / laurence did of a sea-horse, delicate, female, voracious predator.”

Such images pop up and startle throughout the collection; as readers, we’re like the speaker who suddenly sees such things as “batman at corner of 40th & 9th/under the $1 slice.” In “playland,” a poem that touches on the historical association of actresses with “whoredom,” we’re reminded that when you walk down certain streets, “you sorta squinch yrself up make yr field of vision / tiny like / a mini-horse w/blinders.” And when the “new year” comes, the speaker addresses a snowstorm, reminding it, “you are nothing / but random atoms / in ether.”

In New Nails, even the poems themselves are delightfully strange in form and presentation. They de-familiarize traditions of publication by refusing to conform to all forms of order or literary elitism: title format, punctuation, syntax, consistency, etc. Some titles are all lower case and appear a third of the way down the page, as in “small winner,” while some are all upper case and appear near the top of the page, as in “NY WOMAN.” In fact, these two titles are juxtaposed on facing pages, highlighting the author’s refusal to be consistent or predictable.

Such refusal echoes the content of “NY WOMAN,” a self-portrait, but also a construction of a culturally specific gender. The persona who voices this poem embodies the ethos of New Nails as a whole. As the speaker commands, “do not tell me not to talk to / strangers, flirt, network my cleavage, keep my legs / crossed & mouth shut while you are / orbiting Saturn / do not tell me what I cannot & can do.”

Virginia Bell’s first book, From the Belly, is forthcoming from Sibling Rivalry Press in 2012. Her poetry is also forthcoming in CALYX , has appeared in Poet Lore, Pebble Lake Review, Wicked Alice, Ekphrasis, and other journals, and in the anthologies Brute Neighbors and A Writers’ Congress. She is an editor with RHINO and an adjunct professor at Loyola University Chicago.