The thin girl burns calories lifting
hangers from the shopping rack,
hungry as anyone for a bargain.
She is not obsessed with her waist
or the way her stomach laces her hips
together like a rope bridge bent
beneath the weight of the wind.

The thin girl loves flowers. Find her
in a meadow or at the bank, tucking
a withdrawal slip in her wallet,
in a coffee shop drinking chai,
reading the poem about the scarecrow
woman, feeling the deepest parts
of herself swept up in a tornado
of straw and chaff.

The thin girl eats pancakes
at the fundraiser, swallowing
syrup with your tongue, wearing
your clothes until she is weary
with lycra and twinkies herself
into sweats in front of the TV,
fat with longing, starved.

The thin girl eats you alive,
cuts you with razor bones
and dips you in gravy. Just imagine
the bite of one so slight that the space
between the door and jamb is an expanse.
Squeezing between the hinges,
she slips away and you don’t know
she’s gone until you see yourself
in the mirror, sad face, soft belly. 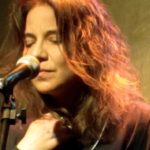 Leslie Anne Mcilroy won the 1997 Slipstream Poetry Chapbook Prize for Gravel, the 2001 Word Press Poetry Prize for her full-length collection Rare Space and the 1997 Chicago Literary Awards. Her second book, Liquid Like This, was published by Word Press in 2008. Leslie works as a retail copywriter in Pittsburgh; her poems and performances can be found at http://lamcilroy.com