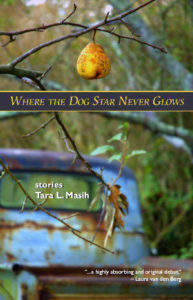 – In Tara L. Masih’s story “Suspended,” a woman accidentally drives her car off the road and is saved by a tree: “The old tree somehow knows to hold her just so, and when she focuses again, she finds her car is suspended, engine taking her nowhere.” Stuck in its branches, unable to move her body, she licks condensation from the window in order to survive. By the time she is rescued, she has formed a bond with the tree. The unnamed driver experiences a gamut of emotions – anger, fear, relief, love, joy and grief – all in the space of a couple of pages.

Masih, editor of the award-winning Rose Metal Press Field Guide to Writing Flash Fiction is clearly in command of the short short form, but in this, her first full-length collection, she shows that she has the stamina and skills to sustain a longer narrative as well. “Delight,” which stretches out over 15 pages, is a fully realized- and delightful – love story featuring a young woman with a disability selling sweets a seaside confectionary in Puerto Rico and a surfer from the States.

Although slim at 143 pages, this volume encompasses a breath-taking range of styles and settings. The title story takes place in a mining town in the late 1800s, while Champagne Water, one of the longer stories in the book, follows an American couple trying to save their marriage while on vacation in Dominica. “Memsahib” is told from the point of view a young boy living in a village at the foot of the Himalayas on the verge of Indian independence. In “Bird Man,” a woman visits Belgium and Holland, trying to figure out what became of her father during the war.

In every story, Masih evokes the natural world in creating a sense of place and also in creating character. In “Catalpa,” a man is defined in terms of his relationship to a tree, while “The Dark Sun” opens with an expat wife observing the migration of butterflies. In the latter, the narrator’s response to the flora of Mexico, as opposed to that of Canada, creates a sense of foreboding: “Such strange things grow here, so different from the delicate, almost puritan-like flowers in the east. I’m used to paper-petaled poppies; flax petals that fall in the lightest breeze; baby’s breath, an enormous lacy cloud made up of tiny clouds. Here, the brightness and heavy perfumes assail my senses. Bougainvillea chokes the house, portulaca’s fleshy branches spread like a weed along the driveway, and the pepper bushes, harmless now, will be a hazard to the baby.”

Where the Dog Star Never Glows provides a fine introduction to Masih’s poetic language, while taking the reader on a dazzling journey to distant landscapes and forgotten times. This is a stunning debut.