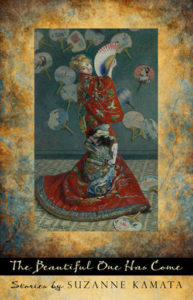 – In the dozen stories in The Beautiful One Has Come, Suzanne Kamata explores the myriad ways in which we meet the unknown, whether it be an unfamiliar culture or an unexpected role. An expatriate living in Japan with her husband and twins, Kamata brings a generous imagination and heart to her work, which involves both American-born and Japanese characters as well as travel to Cuba, Egypt, Paris, and Australia in addition to the United States and Japan.

In several of the stories, American hopes clash with the many constraints of Japanese society. The entertaining “Hawaiian Hips,” for example, recounts the “agony of love” of Victor, a Hawaiian hula dance instructor whose Japanese lover cannot decide whether to commit to Victor or to fulfill his duty as his parents’ only son by marrying (a woman, of course). We witness Victor’s trials and final bold move through the eyes of a fellow expatriate, who was once herself “the big event in this island town” as the yellow-haired wife of her Japanese husband. In “Driving,” American-born Yvonne Hamada finds herself caught between her expectations of marriage on the one hand and her and her husband’s traditional obligations to her widowed mother-in-law on the other. “It’s better to establish yourself as a bad daughter-in-law,” she ruefully comes to understand — until her mother-in-law turns out to be the surprising catalyst for finding a way out of her predicament.

Other stories tell of encounters between other cultures. In the provocative “Havana,” for example, a young American woman comes to the unsettling realization that a fling she had while visiting her former college roommate in Cuba might not have meant what she thought. In the bittersweet “The Rain in Katoomba,” an elderly Japanese woman recalls a long-ago romance with a young man in Australia that was cut short by World War II. And in the title story, a young Japanese woman’s lifelong obsession with Nefertiti and Egypt brings her to unforeseen tragedy.

Three stories in the collection feature Christine and Hideki Yamada and their prematurely born twins. The most affecting of these — and indeed the most affecting story in the entire book — is “You’re So Lucky.” The second-person narration places us in a position of startling — even uncomfortable — intimacy with Christine and her experience of delivering two “baby bird”–like children fourteen weeks too early. “If you could will them back into your body, you would,” she says, implicating the reader in her own fierce love. “You are sorry you dreaded the pain of childbirth. Let them tear you apart if they could be born again, healthy.”

Christine’s story, like most in the collection (notably excepting the title story), ends on a hopeful note. Though Kamata’s stories are about the expatriate experience and cross-cultural understandings — and misunderstandings — they are not, at heart, tales about exile. In this collection, Kamata rather shows how one may seek — and find — true connections, love, and even oneself when one has traveled far from home.

The Beautiful One Has Come by Suzanne Kamata
Wyatt-MacKenzie Publishing, 2011

Brooklyn-based freelance writer and editor Rachael Nevins teaches fiction and poetry writing online for the Writers Studio. She has been published in RATTLE, and writes about making her way toward work-life balance in a family of artists at The Variegated Life (thevariegatedlife.com) .