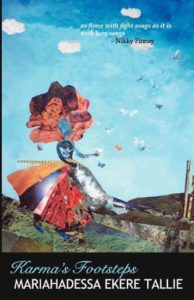 – Karma’s Footsteps, published by flipped eye publishing (www.flippedeye.net) in 2011, is Mariahadessa Ekere Tallie’s debut collection of poetry. Tallie successfully draws the reader in from the very first poem. The first stanza of the first poem, “Her Voice” (For Dr. Nina Simone), is a powerful mix of visuals, sounds and words placed lovingly and deliberately on the page:

“Her Voice” is a poem-song, a loving tribute to Nina Simone, filled with alliterations, as well as a unique assortment of visuals infused with pulsating sounds, such as “crushed blueberries” and “cracked calabash”. The author, who is an herbalist, successfully weaves nature imagery throughout this collection, which provides a refreshing continuity. The back cover of the book aptly describes these poems as “songs of life in all its violent difficulty and beauty; songs of fury; songs of love.” Consistent throughout these poems are the voices of women: strong, pained, powerful, soft, loving, but always clear in their message. The poem from which the title of the book is taken “Karma’s Footsteps,” captures a woman finding her voice and her footing. It begins: “I couldn’t locate my volume / couldn’t conjure a kick” but ultimately the narrator begins to find her voice and locates that volume: “I became less than a whisper / I worked to find my wail.” She goes on to increase the volume: “my voice is a demonstration / of tears marching down / defiant cheekbones / tears loud as footsteps.” “Tears loud as footsteps” is an unexpected melding of images with sounds and provides a sense of urgency and power to this particular poem. Tallie is able to sustain this evocative imagery throughout the collection, with many of these images having a universal appeal.

While Tallie’s poems are often lyrical and song-like, a large part of the power of this collection is due to the author’s commitment to discuss and explore difficult, yet necessary topics, including: rape, war, death, politics, love and sexuality. Tallie’s deep connection and concern for the world we live in is refreshingly evident in her voice. Her poems are unapologetic in their clarity, whether the narrator is exploring the flaws of patriotism or the hopefulness of love. In the poem “Patriotism in Six Parts” we are told “the “made in the USA” label / sometimes shows up / where you least expect it”, while in Refuge the narrator captures the conflict of attempting to love someone and find a safe space, in an often frightening world. The poem begins: “the only peaceful / place I know / is you” “your hands remind me / there are still sunflowers / rivers embroidered/with deep, orange moons”.

Some of the rhythms, cadences and pulse of this collection remind me of an early Ntozake Shange, yet make no mistake that Mariahadessa Ekere Tallie has her own unique poet’s voice that carries this debut collection from start to finish. Tallie, aside from being a talented poet and writer is also an educator, herbalist and mother. To learn more about this gifted author, go to: http://ekeretallie.wordpress.com/

JP Howard aka Juliet P. Howard is a poet, Cave Canem graduate fellow, original member of the Hot Poets Collective and practicing lawyer in NYC. She co-founded Women Writers in Bloom Poetry Salon and Blog (WWBPS), a forum offering women writers at all levels a venue to come together in a positive and critically supportive space. WWBPS hosts monthly literary Salons in NY and the blog accepts submissions of poetry. JP was selected as a Lambda Literary Foundation 2011 Emerging LGBT Voices Fellow, as well as a Cave Canem 2011 Fellow in Residence at the Virginia Center for the Creative Arts. She was a 2009-2010 finalist in the poetry category by the Lesbian Writer’s Fund of Astraea Lesbian Foundation for Justice. She was also the recipient of a Soul Mountain Retreat writing residency in 2010. Her poems have been published or are forthcoming in Of Fire, Of Iron, The Mom Egg 2012 Vol. 10, Muzzle Magazine’s “Best of the First Year” Print Issue, Connotation Press, Muzzle Magazine, Talking Writing, TORCH, Queer Convention: A Chapbook of Fierce, Promethean Literary Journal, Cave Canem Anthology XII: Poems 2008-2009, Cave Canem XI 2007 Anthology and Poetry in Performance. She was awarded an MFA in Creative Writing from the City College of New York in 2009, holds a BA from Barnard College as well as a JD from Brooklyn Law School. http://womenwritersinbloompoetrysalon.blogspot.com/