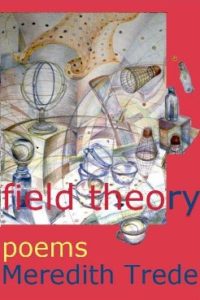 – I love when poetry incorporates science to broaden the scope of its lyric content—simply put, I love Meredith Trede’s Field Theory. The most striking component of Meredith Trede’s collection Field Theory, is the book’s construction. The title, sections, epigraphs, and poem order all speak the multifaceted study of field theory. Field Theory plays a part in mathematics and Newtonian gravitation. Maybe more importantly for this collection of poetry, Field Theory is also a psychological theory which examines patterns of interaction between the individual and the total field, or environment. The collection as a whole works with the precision of a poem—building layers of approachable literary density.

Part I of the collection begins with a epigraph by Stephen Hawking which reads, “Field: something that exists throughout space and time as opposed to a particle that exits at only one point at a time. The section precedes with poems that mark specific moments of tragedy; these tragedies are read as particles existing at a defined point in time. The poems subjects cover a large spectrum; from the parts of speech to genocide, Part I includes snapshots of tragedy that accumulate into full examination; this section reads much like a cubist painting. Adding to the depth of these poems is the sections tone. While the poems are emotionally moving, they are objective investigations into specific points on a timeline.

Part II investigates the importance of context. The poems examine the relationship between art and observer, storyteller and listener, religious truth and religious rite. The section concludes with a villanelle titled, “Laying It on the Line.” The poem’s persona exclaims “You’re nuts. People like us don’t write books. / Your dreaming won’t put food on the table.” This bleak commentary on how language typically belongs to those who can afford also contains a rebellious irony when place in context to the other poems in the collection. Without having to say it, the author announces that even the poor are entitled to pursue their dreams—it also cautions that the greatest impediment to following a dream is the advice of loved ones. This type of poems adds a nice balance of playfulness and dramatic depth to the collection.

In Part III time begins to collapse under the pressure of memory and imagination. In the poem “October Offerings” it becomes more difficult to not conflate the past, present, and past; the poems can no longer remain single points on a time line. The poem reads:

My mother comes to me with words
She thinks I need, scraps
Of paper, fragments of sound
Without meaning. She doesn’t know
That she is dead.
We move through the rooms of my childhood,
Paint-thickened walls, shade-drawn
Windows on empty alleys.
Autumn always frightened her,
The membrane thinned between
Worlds, spirits move more fluidly.
Drawn back to my dresser by her gloves and linen
Still soaked with sachet and moth balls,
She comes to me, her first born,
Only born, to have me put aside
My words for hers. I wake, invoke all souls
For shelter through these nights.

At this point in the collection, it is no longer possible to think in terms of a singular voice—the poems are a choir f voices channeled into images. This is a lovely turn in the collection, which makes this a book deserving of multiple readings.

Part IV ends with marvelous notes of possibility. After reading about the dissolve of a marriage, the loss of a mother, and the wreckage of world wars and cultural genocides, the book resolves with words of wisdom. This wisdom provides the reader with a fantastic sense of hope, as the concluding lines read:

Old women’s wisdom tolls: when the good Lord
closes one door, he most always shuts another

Scrivening to a philosopher’s stone for a turn of word
for renown, base to gold, elixir of immortality
Worshipping scripture and the script, bending
piety to blasphemy in idolatry of the word

The wisdoms found in this collection are graciously taught through imagery and the musicality of its lines. Field Theory is an engrossing book that engages the mind, heart, and spirit; it is a journey across the fields that connect us—the distances that form holistic understanding of humanity.