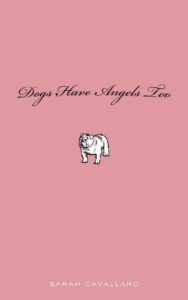 – “Histories are more full of examples of the fidelity of dogs than of friends.”
-Alexander Pope

Sarah Cavallaro’s Dogs Have Angels Too could be renamed “Leader of the Pack or How I Lost Everything, and Found Myself.” Here’s why:

Lena is a fifty-seven year old account executive who has spent more than half her adult life at one New York Corporation when she is laid off. She loses her Upper East End apartment, her husband, and the $250,000 in her 401k to Madoff Securities. Oh, and menopause adds the final flourish to the cascading dominoes of her shattered life. To make matters worse, she has no shoulder to cry on because her ambition and hard work prevented her from making one good friend in all that time. This woman doesn’t even have a casual friend upon whose couch she can crash. She ends up homeless, but not hopeless, and even sleeps in the shrubbery of Central Park.

The views of Central Park and its denizens are colorful, as is the advent of Mrs. Wolf, who may or may not be Mrs. Madoff. Herein lay the twists and the adventure of Dogs Have Angels Too. Most of the novel takes place when Lena is three years into her joblessness. Her transition to the 60-year old dog-walking Miss Pink is a metamorphosis that is largely unexplained. But you must remember that this character has no human friends, doesn’t like hugs, and is a bit of a hard ass. Her job is not merely to walk the dogs, but to find homes for them.

In the process of doing this, Miss Pink makes her first friends, and they’re not all four-legged. Evildoers are outed and Miss Pink finds her life’s work, and it even comes with a paycheck. Sarah Cavallaro’s book reads like a screenplay and it has all the hallmarks of a feel good story. We all know people like Miss Pink: their love, and our love, of dogs is the point at which we connect.

Dogs Have Angels Too by Sarah Cavallaro
worthy shorts 2011

SANDRA RAMOS O’BRIANT’S work has appeared in Café Irreal, Flashquake, riverbabble, In Posse, LiteraryMama, Whistling Shade, La Herencia, latinola.com, and The Copperfield Review. In addition, her short stories have been anthologized in Best Lesbian Love Stories of 2004, What Wildness is This: Women Write About the Southwest (University of Texas Press, Spring 2007), Latinos in Lotus Land: An Anthology of Contemporary Southern California Literature, (Bilingual Press, 2008), Hit List: The Best of Latino Mystery (Arte Publico (2009), and The Mom Egg (Half Shell Press, 2010). Read her work at www.thesandovalsisters.com and www.bloodmother.com