One night, I was reminiscing, which I tend to do a lot of on nights I can’t get to sleep. My thoughts transported me back to when I was a little girl of around seven. I had been visiting my grandmother and an older cousin of mine stopped by before going to the post office. This was one of my favorite cousins. He was over six feet tall, a semi-pro basketball player, and I begged my grandmother to let me go with him. He lifted me on his broad shoulders, and gave me a piggy back ride there. As we jaunted to the post office, my then puny arms wrapped around his head, I felt as if I was on top of the world. I also thought about salt and pepper mustached uncles, uncles whose laps I jumped onto to listen to their catch-up stories and who played bouncy knee with me until I fell hysterically to the floor. This was long before the episode of The Cosby Show, where Bill Cosby’s character Cliff bounced a bunch of five year olds, one at a time on his knee during Rudy’s slumber party.  Back then, in the late fifties when I was growing up, piggy back rides and bouncy knees were as traditional as apple pie.

I loved being the center of attention around the wise old wrinkled men that would stop by my family’s house and before their visit was over I would usually end up in their lap. I loved when my sister’s boyfriend’s called me pretty girl and joked about marrying me as they took my hand along with my sister when I was a third party on one of her dates, translation, she had to babysit me. They never did any of the “bad touches” my mother warned me about only once in my childhood, so there was no need to shun them.

When I think about my children, and now my grandchildren, my two year old and one year old granddaughter’s especially, I feel disheartened. They are growing up in a society that has all but banished piggy back rides and bouncy knees as a natural component of a happy childhood. It seems as if they have become as extinct as a T-rex.

I have always been a radical parent and grandparent in my safeguarding of them. I am my own version of a helicopter parent, one bordering on paranoid. My reasons are valid; pedophiles, and molesters, are not just in many of our neighborhoods, they sometimes are visiting our homes and breaking bread at our tables. Maybe because I am watching too much Nancy Grace or because the nineteen registered sex offenders in my community look like anyone’s father, uncle, or grandfather I watch whose laps they sit on, what hands map their faces, I count down hugs. I am this way even with my grandson, who at thirteen thinks  he’s too smart to be fooled or lured into danger by a Facebook friend. If I had a choice he wouldn’t be on Facebook at all, but his mother has given him this privilege so all I can do is become the annoying voice that cautions him.

I wish I didn’t always have to be in a protective mode. My two year old granddaughter loves to hug people, loves to climb on laps. Who can blame her? There is as much comfort in a lap as there is snuggling with a furry teddy bear. But do I set a timer and say okay, that’s enough time. Do I dangle a new toy in front of her to divert her attention so I can feel at ease?  It’s difficult for me to decide sometimes where to draw the line or extend the rope?

Still, even as I safeguard my three grandchildren as “fearfully” as I did my children, I am also in tune to those people who beyond a doubt love them and would never think of harming them. I see their touches for what they are, love and tenderness in the palms of their hands, people whose bloodline they share in some cases, and in some they don’t, who I wouldn’t bat an eyelash at.

One day when my grandchildren are grown, I know they will cherish the village of people who offered them these delectable touches and on a sleepless night, they’ll have their own nostalgic memories to lull them asleep, even if it has nothing to do with a piggy back ride. 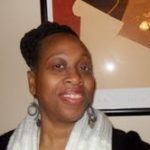 Jeanine DeHoney is married, the mother of three and grandmother of three. Her writing has been published in several publications and anthologies such as Mused-Bella Online, Literary Mama, and in the book Chicken Soup for the African American Woman’s Soul, and Living Lessons. She has also contributed to blogs such as “Good Enough Mother” and “Wow: Woman on Writing- The Muffin’s Friday Speak-out”, and is a contributing writer to EsteemYourself E-magazine. She can be found typing with one hand and playing with her youngest grandaughter Kylie with the other.