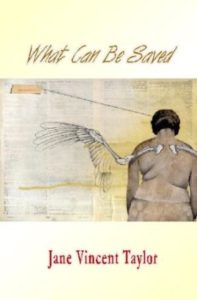 – It’s hard to turn away from the poems in What Can Be Saved. The two speakers— Lovey, with what today we’d call “special needs” and her dedicated Momma—speak directly to the reader in authentic voices. Each poem is titled simply with the speaker’s name.

Perhaps Taylor’s greatest skill lies in her ability to step aside and let Momma and Lovey tell the reader what it’s like to be a single, worried parent, what it’s like to be “crazy”. Although they represent thousands of people in similar situations, each family’s story is unique, so Taylor takes a storyteller’s care not to present them as generic cut-outs but as women who live in a certain town with specific streets at a particular time. In the second poem, Lovey explains: In this window envelope/ is fifty-seven cents—change/from a month of light and water./ March 23, 1958. It took me/ forty-three minutes—there and back—/past the library—to pay our bill.// Momma said I could buy a pack of Sen-Sen/ at the little store.// But I saved the money/ and store it/in a Colgate toothpowder can/ under the bed behind the step stool.// I sleep up high in sanitarium bed/ above my money/ and my bottle cap collection.

Although Momma speaks only eight times to Lovey’s fifteen, Momma reveals the loneliness of her concern.

Every time that train
disturbs my sleep
shaking me awake,
I see Ben sitting on the bed
beside me with his teeth out
and his face all scratchy
with a week of whisker.
I say, Ben get yourself
up to work. The Rock
Island’s waiting.
He don’t move. Gone
on down the track,
that old engine, that old Ben.

What Can Be Saved is not the kind of book that one can open at random. It is best read straight through. In fact, the duet of voices lends itself to two-person oral reading of the entire collection of 23 short poems.
As the term duet suggests, the poems are indeed musical. Even as she keeps faithful to the particularity of the voices, Taylor never loses control of the poetics of poetry. In the first poem (only three lines long), Momma says “I know my grandchildren/ mean/ no harm/ when the call my Lovey crazy.” Even in so short a poem the poet employs consonance (know/ no) and assonance (mean/ must/harm and Lovey/crazy). In three lines, we hear the Momma’s anguish and her tendency to excuse her grandchildren’s thoughtless cruelty, (they mean no harm) and learn the daughter’s name as well as the vernacular diagnosis, crazy.

With the skill of a storyteller, Taylor introduces the two other characters needed for the heightened drama at the end of the book. But we know the end of the book is not the end of the story of Momma and Lovey. It’s as if the stage lights dim and mother and daughter take their place among all those who live quiet, heroic lives off stage. The stories go on and on.

There are many kinds of love stories, and a parent’s enduring love for a mentally-challenged child has to be one of the most moving. Every struggling parent can read Taylor’s book and know she or he does not walk alone. Every classroom teacher, relative, neighbor can read and close the book with more understanding and more compassion. The experience of the poems becomes the reader’s own experience.