I drive across the Henry Hudson Bridge and get off the parkway at Dyckman Street, an exit I have always associated with my mother but never taken before. It is mid-August, blue-skied and not too hot, and my mother is spending a long weekend with Paul and me. Our outing this afternoon is to drive through Inwood, the section of northern Manhattan where her family lived for eight years when my mother was between the ages of two and ten.

In an old black-and-white photograph I have of her from those years, taken on the sidewalk of a New York City street, my mother must be about three years old. She is dressed in what looks to be a snowsuit — puffy pants and a jacket zippered up to her chin — with a woolen cap pulled over her forehead and ears. She is flanked by her sister, Shirley, and another young girl; a woman behind them identified as “Florence from Louisville” encircles the three glum-faced girls with outstretched arms and smiles into the camera from beneath the brim of her hat. My mother looks down, the shadow of whoever is taking the picture obliterating her feet.

Today, she is sitting beside me in the passenger seat; Paul is behind us observing in silence. My mother holds the map I printed out earlier but is not looking at it. She wears cream-colored linen pants, a pink t-shirt, and tan lace-up walking shoes. As we approach her old neighborhood, she straightens, leans forward, turns her head from side to side.

“Nagle Avenue, yes, Nagle Avenue.” She points out the window. “We walked here,” she says. “We went to the movies there.”

Her voice gets clearer, a little louder, as we continue to drive. “And Thayer Street, I remember Thayer Street.”

On a corner is a boxy tan brick structure with metal window frames painted crimson: P.S. 152. “My school!” my mother says. “I can’t believe it’s still standing! And here’s Ellwood Street, where the Rosenthals used to live.”

When I was a child, our family made several visits to New York City, where we saw the Statue of Liberty, the Guggenheim Museum, and the Empire State Building. We traveled by car from the suburbs of Boston, and each time, we stayed with the Rosenthals in their apartment on Ellwood Street.

“We’re going to Aunt Eve’s,” we’d say, even though Eve was my mother’s mother’s cousin, not anyone’s aunt. The building we see driving by with my mother today is just as I remember it: concrete brick with a fire escape climbing its side, near the street corner where what is now a bodega was once, I am sure, a toy store. Aunt Eve’s apartment was on the ground floor, and I remember peering through the grating outside the open window to watch street life so different from our quiet sidewalks back home.

Whenever we arrived at Aunt Eve’s, one of the first things she did was to take my brother Eric and me to the toy store downstairs and tell us we could pick out anything we wanted. This was not something our parents would ever do; they were frugal and a treat for us kids would be considered unnecessary and wasteful. As I trailed a few steps behind Aunt Eve, the noise of the traffic, the shouts of strangers, the closeness of so many people — let alone the promise of a new toy — thrilled me.

Once we chose a container of small plastic monkeys whose tails curved up into a spiral. Back in the apartment, Eric and I spent hours playing with them, giggling as we hung them from the cords of the venetian blind that was drawn up over the window, my mother sitting with Aunt Eve at a table behind us talking about people I didn’t know. There was a lightness in the air; we were on vacation, and Eric and I could play undisturbed, perching on the back of a plush armchair, something we wouldn’t have been permitted to do at home.

As we drive through the streets of Inwood, this memory springs to life. It comforts me, excites me, reminds me of the little girl I once was, but I don’t say anything about it. I deliberately withhold myself from my mother, unable to let out words and feelings that would be easy to share with others. It is a reaction, I believe, to her passivity of the past. When we talk now, she is open-minded and pleasant, never cruel or critical. But there is something inside me that remains reserved. Perhaps I am being cautious, unwilling to face a response from her that might be inadequate or disappointing. Mixed into that, I can’t deny, is an anger I wish I didn’t have. In another family’s car, there might have been laughter and tears, but in ours there is quiet. That flicker of awareness is like swallowing something sharp.

Then we arrive at her old apartment building, 34-54 Hillside Avenue. It is red brick, with a terracotta-tiled walk leading from the street to an arched glass doorway. We park and get out of the car.

My mother gazes up at the rows of windows stacked one above the next. Then she turns and looks across the street. “We used to play there,” she says, directing our attention to a sloping, overgrown park enclosed by a chain link fence. I try to picture her there, tossing a ball with Shirley, running back home down the hill when it was time for dinner. I try to imagine her, dressed in her winter jacket and hat, going in and out of the glass doors. But I cannot bring her to life.

“Come on, let me take your picture,” says Paul.

When we get home, Paul brings the image up on his computer screen. In it, my mother stands in her characteristic posture: legs slightly apart, shoulders a little rounded, her head tilted the tiniest bit upward. She is at the end of the walkway, in front of the doors. I am standing on her right, and it looks as if her arm is reaching out to touch my back. 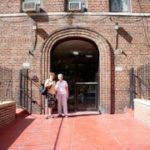 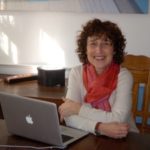 Susan Hodara is a journalist, memoirist, editor and teacher. Her articles about the arts have appeared in The New York Times, Harvard Magazine, Communication Arts, and others. Her memoirs are published in a variety of anthologies and literary journals. She is co-author with three other women of Still Here Thinking of You, memoirs about mothers and daughters.www.susanhodara.com