“I wonder if my children will ever really know me?” My friend, mother of four, grandmother of many, asked me this when she was sixty-something. At this time she had become a certified counselor for elders encouraging them to uncover their own wisdom.

This moment redacts in my memory at thoughtful moments of quiet. Another question seems even more pressing; “Did I every really know my own mother?” During my long years in therapy, this was not a question that I asked, nor did my therapist. During incessant self-absorption, I kept asking: “Does my mother really know me?” I wasn’t at all like her or any of my Polish born siblings: I was born on the North American continent, Canada; I went to college; I moved away to academic circles; I was not like anyone else in my nuclear family: I was a Writer, with a capital “W.” Couldn’t she see this?

Today, I cringe at my young naïveté, especially after a surgery, the first of two, to clear my eyesight. However, with one eye corrected and the other eye cloudy, depth of perception problems arose accompanied by a new clumsiness and numerous accidents: I fell down the stairs. and sprained my ankle. I broke a lamp. While pouring coffee, I misjudged, missed my empty cup, and flooded the kitchen counter.

Because of my injuries, my doctor prescribed that my ankle be elevated, and that I get a lot of rest. And so these thoughts and memories arose, especially before arising in the morning. However, this time decades later, I had another perspective.

I remembered that my mom also had cataract surgery in 1980, when she was 80 years old. By then she was a widow, with three of her children dead, and alone in a small apartment in a small Canadian town, far from me, her only surviving child. Even though I didn’t fully understand her plight, I flew to Canada to nurse her. In those days, the cataract patient had her head held still by sandbags, the operation was longer, more painful, and took 6 to 8 weeks to heal. She was deeply anaesthetized as well. With great trepidation, I went for a week or two to help her. During her hospital stay, I helped her to walk the hospital corridors using her new cane. As she tapped along in great pain, she kept saying: “What did I ever do to Freud, that he should blame me for everything?”

Those were the days of mother-blame in therapy, and she certainly knew that.
I’m cringing as I write this now. I took photos of her immediately after surgery, in great pain, with her physician at her side. I also photographed her when she came home to her small apartment. I managed to take a telling picture of her that hangs very close to my desk now, years after her death in 1990.

I didn’t see then the traits I see now. 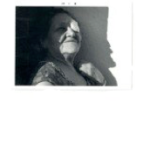 Here is that picture of my mother Tzivia Lipinski Friedman at 80 years of age, a survivor whose Holocaust family of 80-something perished in Auschwitz, who had her firstborn son die at birth perhaps by inept midwifery, who waited in Grodno (then Poland) with two small children for her husband to send money to come to leave the ghetto for a new life, who at 27 years old crossed Europe and the Atlantic ocean with two small children, my older siblings, while she was ill, could only speak Yiddish. She realized that she would never see her close-knit supportive family again. Subsequently, she saw these two children marry, have children, and then die in their forties. Her life partner of fifty years, my father, immediately died of a broken heart, and her only child, me, lived thousands of miles away.

Her four grandchildren also moved away to college and marriage. I had one niece and three nephews then. Today, for a variety of strange medical conditions, two nephews and the niece passed away as well. Only one nephew remains and he had a daughter die at eight years of age. Mercifully, my mother did not live to experience these losses. Through all this, she never quite mastered English or the American culture; yet the undaunted look of courage is unmistakable.

Ten years after my mom was tapping along with her cane asking about Freud’s grievance with her, I fired my therapist. It was enough for me of DSM categories and lock step thinking and an emotional logic with which I disagreed. I have nothing against good therapy; I’m married to a very good therapist, and actually I am a recovering therapist myself. I just don’t agree with the logic any more that premises the beginning of suffering is childhood experiences, that uses the Diagnostic and Statistical Manual of Mental Disorders without nuance, and that considers the dimensions of spiritual approaches another hallucination.

My mother was right: mother blaming doesn’t help. What helps is cultivating understanding with compassion what my mother endured during her lifetime. Cultivating compassion widens the heart. I compared my life passages with hers to deepen my empathy. At 27 she traveled alone across the world with two small children; at 27 I had two small children and was comfortably married. I had to process my own shock when my brother, sister, and father died within a two year period, suddenly and inexplicably. At the time it was unbearable for me, but she had many more losses than I by the time her children died. All her family was murdered in Auschwitz in the 1940s. Racked for years with a search for reasons, I can live with the mystery behind the sudden deaths of my sister, brother and father, and I have stopped blaming myself.

There are numerous new approaches to suffering including one that I discovered recently during my last ten-day silent retreat at a meditation center in Western Massachusetts. It reminded me of my first meditation weekend with Alan Watts in California in February 1969, just after my sister suddenly died. After assuming the meditation posture, listening to the breath stabilize, become shallow, as my heart rate slowed down, I heard an inner sound and used it to focus. I did a body scan and located an ache near my heart. In the manner of the Zen teacher Thich Nath Hahn, I tended to this ache like a mother soothing a crying infant. I cultivated compassion towards my own heartache. It changed. All the meditation teachers teach that every event, feeling, and memory has a beginning, a rise, and a fall. Watching this takes patience, but it also takes faith that these three phases always occur. And they always do; there is a beginning, a middle, and an end to everything. Somehow this teaches us to have the strength to endure.

The Dalai Lama also teaches that compassion builds confidence. The repeated experience of processing suffering and experience in this manner reinforces an inner strength. I can attest to this. When I remember to practice in the way that I just described. That’s why I found it necessary to do a ten-day retreat before my own cataract surgery. I was terrified. I realized how frightened my mother must have been about her own surgery and loneliness.

Perhaps having a cataract operation opened my vision to the past in a new way. Perhaps it was just having more recuperative time to think, or perhaps just living through similar life cycle events allowed me to greet my mother’s memory in a more mature way. In knowing my mother, I think of her more affectionately, and I hope that I can have the same kind of courage in my life. Here I am after the first cataract operation, now trying to emulate my mom. I hope her courage is with me as I face the second cataract surgery. I certainly hope to be more careful on stairs.

The author of A Jewish Mother in Shangri-la, a memoir about meeting her Buddhist son’s gurus, Rosie Rosenzweig is a Resident Scholar in Women’s Studies at Brandeis University in Boston. She is also an ordained teacher (Morah L’Hitbodedut) of Jewish Meditation. http://www.brandeis.edu/centers/wsrc/scholars/profiles/Rosenzweig.html