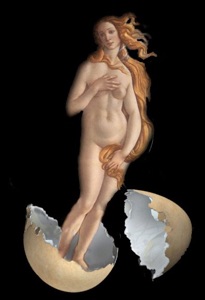 – As every mother considering What To Name the Baby knows, names matter. They resonate, they project, they herald, they evoke. They are subject to personal and societal associations: I could no easier have named my child Eugene, because of the freckled brat in my fourth-grade class, than Adolf or Idi. The summer I was fourteen, I’d insisted that everyone call me Mia; when they complied, I felt myself infinitely more ethereal than prosaic Marjorie. For us as writers, words are inherently important. They are our palette and our currency, the way we frame and define and color the world.

When I tell people I edit a journal called The Mom Egg, I get one of two reactions: “huh?” or “the what?” The title is quirky and unexpected. It does not roll easily off the tongue, either slurring together to form themomegg (an omelette?) or requiring a full stop after each word. The. Mom. Egg. Pretty much no one gets it.

There’s the egg part, which is confusing (what is it, a cookbook?) or a bit humorous (picture Miss Prissy, the Warner Bros. chicken, shrieking, “My egg, my egg!”). And then, there’s “Mom”. Unlike “Mother”, which has an undeniable dignity, or “Mama”, a trendy earthiness, “Mom” sometimes seems to evoke condescension and un-granted familiarity, like when my son’s dentist tells me, “Here’s what we need to do, Mom,” as if I were his mother. Or the name implies a particular kind of mother, wise in that smug way, but limited; knowledgeable about peanut butter and cleaning supplies; a TV Mom, a Madison Avenue Mom, “Dr. Mom”, “Mr. Mom”, “Choosy Mom”, and the like. One pictures some Donna Reed/Brady Bunch/Roseann/Malcom-in-the-Middle-Mom amalgam, just the relevant generation’s cliché.

So when The Mom Egg, which had originally been conceived as the official journal for Mamapalooza, formally became an independent literary publication, I was tempted to change the name.

The last time I had such a momentous (it seemed) naming to determine was when I was getting married, back in the seventies, and had to figure whether to use my husband’s name or my own. Unlike selecting a child’s name, or the dog’s, which just has to sound nice and set the right tone, there was a political aspect to the choice: I would be heralding the way in which I viewed my status. I wasn’t particularly attached to my family name, Altman, per se; it was neither here nor there in terms of “nice” and wasn’t, in fact, the actual name, which had been rumored to have been changed by a well-meaning intake officer at Ellis who mistook some arriving relative’s claim to be the family elder (alte) for an assertion of surname. In any event, it didn’t seem particularly laudable, feminism-wise, to maintain my father’s name, rather than my husband’s; even my mother’s maiden name had come down through a masculine line. I split the difference and decided to use both; printed Marjorie Altman Tesser on my stationery and checks, and considered my decision a masterful maneuver. (In actual usage, the Altman quickly fell by the wayside, as had my middle name, Lynn—I briefly considered calling myself Marjorie L.A. Tesser, until I realized that would be ridiculous for a native New Yorker, much like calling a California kid “Bronx.” But I digress).

That decision was relatively challenging, and I had, basically, a choice of two. But here, re-naming a literary journal, the possibilities were infinite, or seemed so until I began to consider them. Mythology? All the good ones were taken, or too obscure, not directly related, or unpronounceable. Latin? Pretentious, for me; I don’t really know it, other than legal and popular phrases. Other languages, Biblical names— too exclusive. Names implying creativity— clichéd. Mother-y words— predictable, or too coy. Everything I thought of was too stuffy or too cutesy or annoyingly cool or downright misleading.

I developed a certain grudging affection for the current title. For a good portion of my life, I answered to Mom (maybe 1000 times a day!); was introduced, or would introduce myself, as “Shauna’s mom,” “Ben’s mom,” or “Randy’s mom.” The other Moms I knew were strong, intelligent, creative, hard-working, talented women, nothing like the pale images on screen. There’s a power in taking back a cliché, even a pejorative, and bearing it proudly, as gay people did with “queer,” or re-asserting your right to a symbol that had been hijacked by a rival interest group, like a liberal wearing a flag pin.

The Mom Egg has always encompassed many voices, elevated and demotic, formal and experimental, political, angry, and just plain zany. A lofty academic-sounding title might scare away readers looking for a good time, which TME always is. Also, The Mom Egg has published (and discovered! —or should I say, hatched?) many wonderful writers and artists in its six prior years of publication; its name appears in many of their bios, and the three most recent past editions remain in print, and still sell.

So, for the moment, The Mom Egg will remain itself, bearing, as we all do, many associations, not the least of which is that suggested by our new logo: Venus rising from a cracked egg to view the world, and bring to it her vision and her beauty.