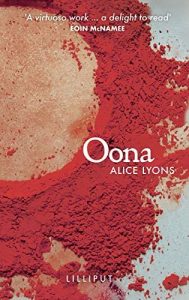 Although there are two O’s in Oona, the title of Alice Lyons’ extraordinary debut novel, that vowel never appears within the pages of the book itself. It’s a testament to Lyons’ talent that this reader did not notice the missing letter until its absence was pointed out by another. Lyons is a poet and painter, born in America but living by choice within range of Ben Bulben, the massive flat-topped hill in Yeats country in the West of Ireland. Yeats was another poet who liked to do the ‘difficult’ with language, sometimes choosing to write with words beginning with the letter K—a letter not that well represented in English.

The first line of this novel pulls us into the aftermath of the narrator’s loss of her mother: “I have diminished myself relentlessly. Why? Because these fragments—because I am in pieces.” (3) And so we proceed—reading short pieces, written with a diminished language. We follow as the narrator tries to find traction in the whitewashed suburbs of 1950s New Jersey: “The suburb started in an ice sheet that was 2500-3000 feet deep, near Mahwah, New Jersey.” (38) “We played and dug up triangular, lithic darts by the handful.” (40) This is the land where the narrator comes of age, motherless and disconnected from her people who emigrated from Ireland to clean houses and build bridges, whose language was shunned. “We wanted a new speech. A tasteful talk, beige as the carpets in the hallways and the granite kitchen surfaces emerged in Urban Farms. . .as the language disintegrated, we did as well. Didn’t we miss the sweetness in speech?” (41)

Our heroine—as any woman who seeks to find herself surely must be—makes her way through the American education system, barely surviving suburbia, then returns to painting, to the language of color. She lands in Maine “in a place called Haystack with the Atlantic thrashing the land beneath where I slept.” (95) “Painting was seeping into me again. Just a start.” (101) When her father dies she takes her inheritance in the form of citizenship papers and moves to Ireland: “I see a chance… Increase the time I can spend in art. Lessen the time spent in blindly earning cash. I might find a place in a culture that still values culture. I might matter a bit.” (110)

Once we are in the land of “sweetness of speech” Lyons’ prose takes on vestiges of Joyce, Yeats, and the lilt that envelopes her heroine. “Myself was water in a glass jar with mud in it that had been martini-shaken and needed settling.” (127) And so she settles, deep into the green village, far into the wild sea, into the world of paint: “Terra Umbra Bruciata manufactured by Ricci Belle Arti in Siena reads the label. Terra per pittura. Sacred pigment because it generated fifteenth-century pictures that still instruct twenty-first-century me.” (166) As Irish village life erupts all around her (a most amusing section of the novel is devoted to shite) the pieces, the fragments, of Lyons’ heroine begin to come together as she paints.

Others have written about the artistic endeavor, about how paint meets paper, how the artist creates, but Lyons takes us inside the paint: “Mix sun-thickened linseed (stand) with turpentine in a baby Pablum jar, which makes a medium, a carrier. Actually it is like saliva in the way that a finger is wetted when turning a page. It advances things. I like mixing in wax, just a little clump, as it lessens the surface’s sheen when the painting is dry, aligns the painting with bees.” (221) And there, in a tight little recipe, lies the secret to Oona’s healing. Poetry, paint, and the natural world. All is illuminated in this astonishing novel.